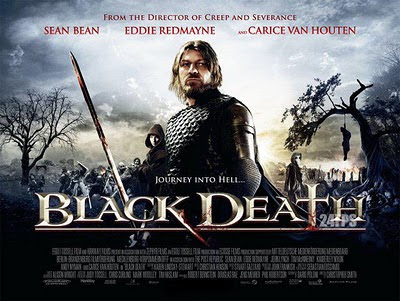 Eddie Redmayne is Osmund, novice monk and lover of the beauteous Averill. When he sends the object of his lust out of town to escape the pestilence, she duly advises him that he must now choose between her and his vocation. She will wait for him in the forest beside a stone cross every morning for the next few days and then she will be gone forever.

Osmund prays for a sign and sure enough in rides Sean Bean as Ulric, the local see's strong-armed representative. (The Templars didn't make it beyond 1311, so Ulric wears a black cape with what looks like a Maltese cross, perhaps suggesting membership of the Knights Hospitaller.)

Rumour has reached the bishop of a village that has been spared from the plague which was then in the process of wiping out almost half of the old world's population. This can only mean that the villagers have taken up with the devil. Indeed, it is said that a powerful necromancer has assumed control of this isolated community. Ulric needs a guide and it just so happens that the virus-free village is in more or less the same area that Averill will be waiting for Osmund, so he volunteers pretty eagerly.

The next section of the movie involves a journey to destination with character development, much in the manner of Saving Private Ryan. Osmund gets to know Ulric's brutish but not unlikeable little God squad, of which the outstanding member is Wolfstan, played superbly by John Lynch.

Once they have crossed the marshes and entered the suspect village to an apparently warm welcome, the issue at hand becomes whether these carefree folk have established for themselves a kind of proto-Denmark, resiliently secular and free-thinking, or whether this is more like some sort of Taleban terror camp full of individuals who like nothing better than to cut Christians up into little bits. Suffice to say that the conundrum resolves itself in a manner reminiscent of The Wicker Man.

But in a sense, it never really resolves itself. Osmund is both a good Christian and a bad one. Langiva the witch epitomises both the survivalist anti-church/state condition of the villagers and the imposition of an alternative, equally nasty, repressive and ultimately bogus local order. Tim McInnerny (Lord Percy from the Blackadders.) is both the witch's maleficient henchman and yet also a level-headed doubter who can declare with some certainty that 'there is no God'. Only Ulric is unconflicted, yet he is the character who most obvioulsy gets pulled in two different directions as the pitiless reality behind all this human myth-making is revealed.

The Black Death is surely one of the most significant events in world history, yet it had the misfortune to occur in the fourteentn century, an era not many people are at all interested in.

It was nevertheless a game-changer, altering the very fabric of European society in ways that would have a profound impact on the development of the West, as the Middle-Ages gave way to the Renaissance. For that reason it has proved a source of great contention amongst social historians.

I'm currently reading John Hatcher's The Black Death, a partially fictionalised account of the plague based on the records in a Suffolk village. I attended John Hatcher's lectures at Cambridge and was supervised by his star pupil Dr Mark Bailey. Between them this pair were doing much to undermine the hold Marxist historians of the French school had taken on this period.

Now Marx had two views on the workings of history which he never fully resolved. In The Communist Manifesto it seems that the main agent of social change is struggle between the classes. But Karl was a deep-thinking philosopher as well as an agitator and wishful thinker, so in Das Kapital, he appears to be describing a more impersonal process — societies move from one kind of order to another as their material base and technological know-how progresses with Hegelian inevitability, such that you can look at any nation's political 'superstructure' and quite simply predict its underlying economic arrangements, and vice versa.

Now there's a degree of truth in this, and this is why most serious academics won't subscribe to the view that we suddenly discovered that everything Marx said was a load of bunk at the end of the eighties. His characterisation of historical change does still have some explanatory power.

But what Hatcher and co demonstrated, primarily using the stark fact of the Black Death, was that sometimes something completely unpredictable occurs and re-jigs everything. No dialectical system can really cope with historical exceptions on this scale, which is probably why many Marxist historians spent a great deal of time trying to downplay the impact of plague mortality. Yet however hard they tried, new evidence regarding the deadliness of this pestilence kept emerging.

What we now know is that England (and most of western Europe) was overpopulated at the start of the fourteenth century with many of poorest members of society constrained by serfdom. At the same time a high proportion of free peasants lacked the land to fully sustain themselves and had to work part of the year for wealthier landowners in what was a very competitive labour market.

Then along comes the plague and takes just under 50% of the population out of the picture almost overnight. By the end of the century serfdom was doomed and the peasantry had established a seller's market in periodic labour. Pressure on land was also much reduced of course.

Yes there was some class struggle along the way, most notably the Peasants' Revolt in 1381, but the primary engine of this massive social overhaul in late medieval England was undoubtedly an event which was essentially external to all other baked-in factors of change during this period.

I had one largish quibble with the film by the way: the quantity of make-up worn by Carice von Houten as Langiva. When Queen Elizabth II was crowned wearing red lipstick this was a biggish deal. To her grandparents' generation these sort of personal adornments were strongly associated with actresses, prostitutes and lead poisoning. The association with actresses remained of course, and the modern cosmetics industry can be very grateful to Hollywood.

Non-toxic stuff to paint your face with only became available when Polish-Jewish immigrant Max Factor opened up shop in LA back in 1908. Earlier on, Eugène Rimmel, who based himself on London's Bond Street in 1834, had developed the first factory-made, non-toxic mascara, but still much later than 1348 where eyeliner was apparently de rigeur for all would-be toothsome wenches, at least according to the makers of Black Death.