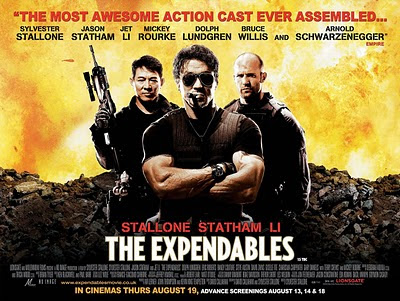 I suppose it's the concept that makes this a must-see: a bunch of unreconstructed 80s action stars dumped into an unreconstructed 80s action plot, complete with corrupt puppet dictator, rogue CIA agents and a jarst bodiez-style systematic suppression of a small, but ultimately useless, Hispanic army.
In truth unreconstructed is the last word that springs to mind these days when one is confronted with Sylvester Stallone's appearance, especially when he's straining muscles somewhere behind his ears in an attempt to maneuver his lips into speech. He's not noticeably less coherent in the scene where he's having to talk while a rope is being twisted around his neck. (And then there's that bloke in his team who V likes to refer to as Dolph Grandulón.)

In such company Jason Statham sounds like Stephen Fry. In fact Statham is pretty much the best thing about this movie, whose older stars are hampered by Stallone's determination to play this straight, and as a vanity vehicle for his own undiminished machismo. Indeed, if he was ever capable of a knowing wink at the audience, it's surely not something his stiffened features could manage these days.
The film opens with a Somali pirate scenario which is marginally more promising than the retro-tropical caper which subsequently takes shape. Jet Li seems on the verge of being wasted almost from the outset, but somehow makes it through to the end, sharing the apparent invincibility of non-Spanish speakers on the island of 'Vilena'.
The Governator appears in a scene with Bruce Willis and Stallone, though it's rather obvious that the three of them were never in the room at the same time. But for these Bruce and Arnie cameos, this particular blockbuster might well have merited the more direct route to DVD/Mexican Bus. That said, things are blown up and bad guys bumped off in an entertaining manner throughout.
Jean Claude Van Damme turned down Sly's invitation to join the cast, presumably because he at least has now moved on to ironic postmodern self-examination.
Grade: B(+)
Posted by Inner Diablog at 9:04 am