This was close to the top of the list of books I intended to acquire in New York this year, in part because it had ceased to be available in electronic format some years ago, and since Rapidito Express shut up their operation in La Antigua I have stopped buying paperbacks via Amazon.

Like many I suppose, I came to Saunders somewhat tardily, after he had won the Man Booker Prize for his extraordinary first novel Lincoln in the Bardo, though it was in the shorter form that he had established himself as in contemporary American letters.

This was his first collection from 1996. In his gushing introduction Joshua Ferris describes the titular story as his first "unequivocally great" piece of short fiction.

It appeared in Ohio-based The Kenyon Review in 1992.

I don't think I have ever encountered s a more 'perfect' short story. Across thirty odd pages of text one does not seem to encounter a single word which isn't pulling its weight. Towards the end I was beginning to anticipate the punchline to a bittersweet gag — possibly more sweeterbit upon reflection — usually in the middle of every paragraph.

I am not sure if satire is supposed to be compassionate. But is this story forbearing, really? Maybe I was laughing too much to properly clock the darkness, but I did come to notice the author, whose voice could often be heard as a super-textual whisper above that of his narrator, and perhaps this at least suggests a shortcoming in something otherwise so impeccable.

Ferris concludes that "while Saunders does satirize, or, in other words, render the real absurd, he also carefully and lovingly renders the absurd real, which is a much harder trick to pull off".

So my own uncertainty, whether this is humanity with a wicked aftertaste, or perhaps vice versa, may ultimately be redundant. Rendering the nasty...nice. 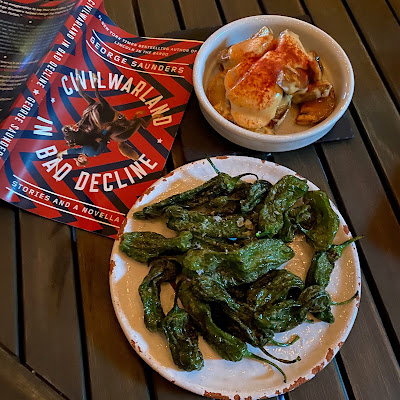