This will be remembered, amongst other things, as the year we Brits confronted a significant epistemological fork in the road. Do we plug for 'my truth' or 'recollections may vary'?  And now we know that Harry's forthcoming tell-some book will be a 'literary memoir', we can expect further mystification to adhere to this choice.

Francisco Goldman has become something of a master of autofictional narrative. His excellent first stab at it, The Long Night of White Chickens, featured a narrator by the name of Roger Graetz who, like the author himself, hails from a combined Guatemalan and Jewish-American background. 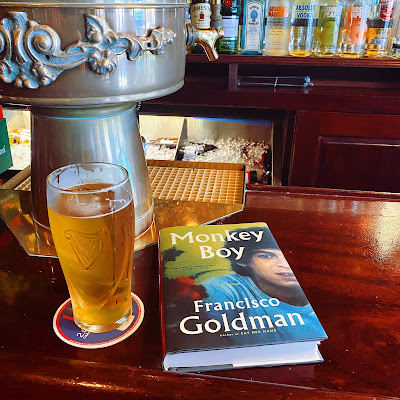 In this, his latest, the avatar goes by the name of Bert Goldberg, closer to the 'original' and perhaps more proximate to the biographical truth. Recollections do appear to have varied, as this time Goldman has apparently been a lot harder on the memory of his father.

In spite of a very positive review from James Wood in the New Yorker, I had to dig around a bit to find this first edition, eventually locating it at Rizzoli on Broadway.

I have a marked preference for literary novels with certain qualities. Firstly, a dogged resistance to movie adaptation. Secondly, and surely more importantly, the tendency to impart important truths which might only really be revealed through fiction.

After the war, once readmitted as a Mitläufer (Fellow Traveller), Martin Heidegger explored how the function of poets and artists could be characterised as ‘unconcealment’ (unverborgenheit), a rendition of the Greek term for truth: alētheia.

Being the sort of German that he was, he imagined this un-hiding of deeper understandings as the result of a penetrating light reaching us after we have made a small clearing in an area of dense forest.

Goldman undoubtedly gets this, as perhaps his most outstanding work to date has been The Art of Political Murder, a non-fictional account of the 1998 murder in Guatemala of Bishop Gerardí, with usefully added art.

And in Monkey Boy it turns out that Bert Goldberg has penned a similar title: Death Comes For The Bishop.

Posted by Inner Diablog at 9:56 pm