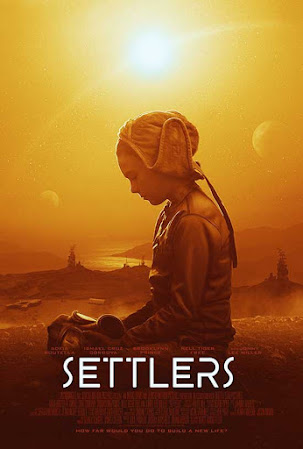 Settlers is seriously unsettling. One of those movies you go to sleep on and wake up finding large chunks of it still sitting in the area of your upper abdomen, undigested.
Viewers are dropped into a situation which is apparently simple and comprehensible close up, but mysterious and unexplained the further one pans out.
There are elements of this that are rather familiar. Earth is "not what it once was" and so humanity has gone looking elsewhere; Mars in this case.
It is not immediately obvious how this has been achieved or indeed how well it is going. Nevertheless, it soon becomes clear that a proper fight for survival is under way, human and environmental factors at the fore.
And here, maybe it made a difference for us that the last movie we watched before this featured an extinction-level event of the living dead variety (albeit a slightly unusual one — The Night Eats The World (2018)— set in contemporary Paris), for I believe we have as a culture become inured to how the residual sentients tend to segregate in that now over-worked scenario.
In Settlers we get to know four would-be survivors. They all seem decent enough, though there are serious enough grounds for conflict. There's a well-mannered yet ruthless antagonist one should hesitate to qualify as the villain.
Base, biological instincts appear to be broadly constrained across the group, yet every one of them is ultimately seen to be capable of homicide, three in order to hold on to the palpable opportunity to persist, and one other in order to break out into the more mysterious existence beyond.
In your bog-standard zombie apocalypse, survivors have near enough total freedom to be whatever they choose to be. The zombies too are free, yet dead. In his intro to The Walking Dead in its original comic format, Robert Kirkman notes that "In a world ruled by the dead, we are forced to finally start living" — the walkers being a very prevalent and mobile form of memento mori.
The situation is thus inherently replete with reminders that we should constantly ponder what being alive is all about, for during both pre and post apocalypse the wrong choice, the one leading to a form of ghoulishness, is undoubtedly available.
However, an existence thus threatened moment by moment may also lead one away from explicit life-affirmation. In the trenches of WWI, the poet Wilfred Owen suggested that the way to survive the shelling was to become dead whilst yet still alive.
The characters here have less than total freedom, it seems. A life of quiet desperation might actually be optimal. As someone who has lived in both a fully modern, consumerist society and one that is a bit less so, I found this calibration of what one can reasonably hope for both poignant and thought-provoking.
Our Martian settlers have to decide if self, family or species should be the impetus for their struggle, but even the notion of shared species could be specious, as certain humans might even be taken for usurping extra-terrestrial invaders in this context.
The choices each ultimately make are comprehensible and yet the consequences are disturbing, particularly in the light of what writer-director Wyatt Rockefeller leaves unexplained, or at least only shows rather than tells. (For instance, the reason why the parents we first come across have had but one child.)
Highly recommended.
A few words on The Night Eats The World. It's not a contribution to the genre that one should feel obliged to seek out but has, rather like its marooned protagonist Sam, some interesting idiosyncrasies. 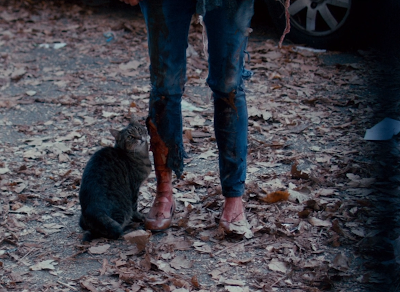 Having crashed out on a sofa in his ex-g/fs flat during a party, Sam awakes to find that the city around him has basically eaten itself overnight. He seems to broadly understand the scenario, though his more or less solitary situation prevents us from learning about it in detail. 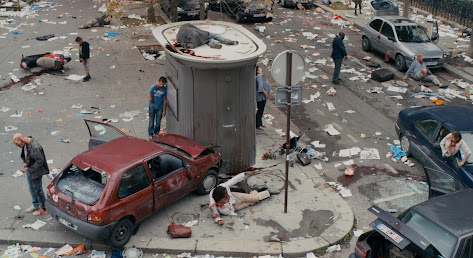 Not so gay Paris: No England fans involved...
For most of the movie Sam is seen to be exploiting both the survival and self-developmental opportunities closest to hand. I was reminded a bit of the first episode of The Last Man On Earth, but as Sam is probably Norwegian, his overall approach is generally a bit more serious.
It's only really in the last act that he appears to wonder whether it might be worth striving for more than mere personal preservation.
Posted by Inner Diablog at 8:30 pm