'Quirky' American indie comedies are often beset by some recurrent problems such as fine, genuinely funny performers struggling with an unfunny script and mediocre comic performers making a hash of some fairly promising lines. Then there's the fact that they are often written, directed, performed and produced by the same people, with the result that much of the material is ultimately more overtly personal than universal. Plenty of all that going on here in this 'feel good' end of the world scenario. 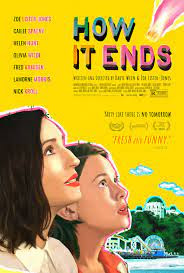 For the second time this week I was forced to think back to The Last Man On Earth where flashes of smart funniness bobbed up from the pond, then the lake, then the sea, of painful dross.

To be fair, the movie was shot during some actual approximately-apocalyptic conditions last year, so some of the stiffness here originates from the fact that the characters are shown wandering around deserted suburban lanes systematically engaging in weirdly social-distanced exchanges with both knowns and un-knowns as an interstellar object rushes to bring life on Earth to an abrupt end.

We have seen how it ends so many times, so the way the incoming comet situation is handled here, with middle class angelinos preparing for the big night with something akin to calm resignation, is the first of many underlying ideas which is wasted here.

The next one is the notion that (some) people have invisible sidekicks consisting of their younger selves, metaphysical attachments that have become at least partially physical in these most final of circumstances.

For the first half hour or so we were cheered in the main by the agreeable presence of Cailee Spaeny and by the more niggling presence back of mind of another kind of alternative self: the darker-quirky euro-auteur handling of this same conceit.

But it didn't last. Zoe Lister-Jones's (writer, director, producer, performer) protagonist Liza sets off that very evening to resolve some of her long-term issues: both her divorced parents, a douche of an ex, the ex she let get away and an ex-BFF. These encounters are largely too mannered, the characters close to caricature, so the more entertaining interchanges initially occur with randoms on the street, though there are diminishing returns there too. The 90 minutes start to feel less like How it Ends than When Will It End?

One of the best things about this film — those succulents... 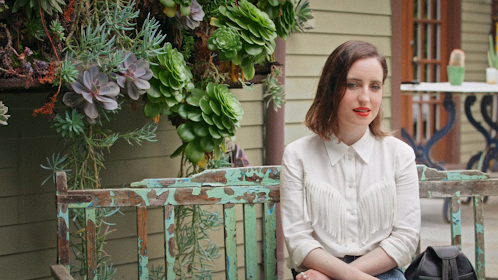 Posted by Inner Diablog at 5:14 pm