The much touted great day of English liberation has arrived. Parts of the world have, it must be noted, been gazing on rather sceptically.

An element of the problem is that if you thought Brexit was evil and New Zealand has the best evs government, then this is likely to be another issue where one rushes to upload a ready-made, essentially tribal opinion.

To make matters worse, the Metropolitan Police were having bottles thrown at them in Parliament Square this morning by eedjits protesting against a lockdown, which to all intents and purposes had ended at midnight.

However, the English experiment may not be as reckless as it might appear on paper.  Here's one reason... 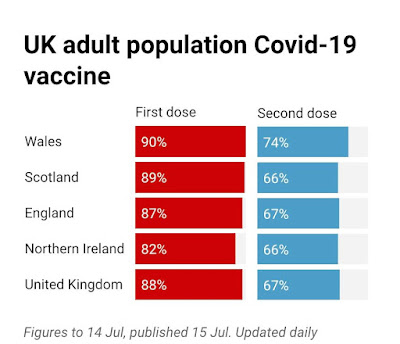 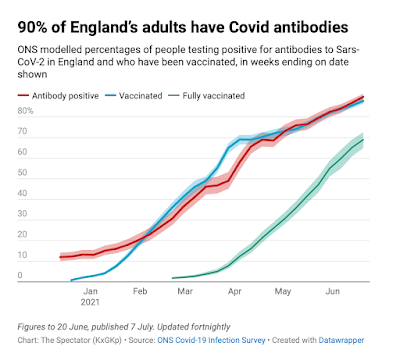 There are of course some caveats. Unlike the USA we may not have entire, economically-significant regions dominated by anti-vax dunderheads. 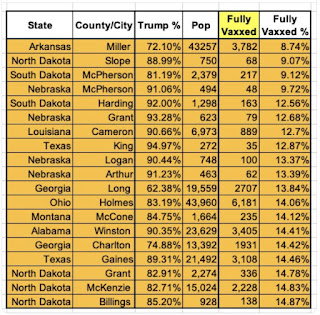 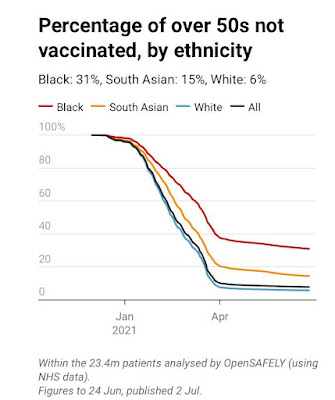 The trick will be to consistently keep the relatively vulnerable and the relatively reckless at a safe enough distance. This will of course not work in all places and for all cases and so sadly, some people's lives are in effect going to be sacrificed as a result of this political compromise. 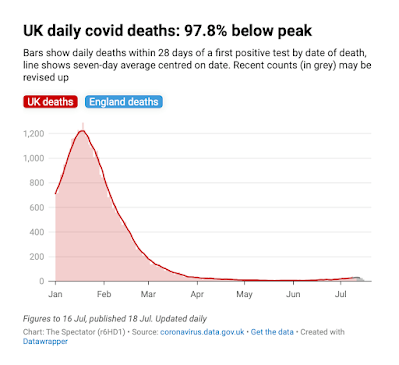 In England we had a civil war in order to distance ourselves from the European tradition of authoritarian government and for the roughly 400 years since, we have tended to believe in our own bombast about personal responsibility, invisible hands, civil liberties and the like.  So, if anyone is going to make this work as the result of a kind of personal honour system it might well be us Brits.
The Japanese have always been pretty good at personal honour systems, but in spite of the fact that they had known for a very long time that their capital would be playing host this month to a massive influx of Olympic delegations from nearly every nation on earth* — not all of them vaccinated before arrival — they have lagged behind in getting the shots to their own population. They'd jabbed around 20% as of last week, 2/3 the level of Mexico, which for some reason has been rather generously vaccinating Guatemalans as well.
Let's face it, these vaccine tours to Tapachula are seriously bonkers. One has to wonder which official in Chiapas decided, presumably in part for economic reasons, to invite large groups of Chapines over, politicians included, when a significant part of their own rural population remains un-covered.
Many of the vaccine-tourists are travelling up the Atlantic Highway in re-purposed school buses without on-board lavatories, and so presumably have to stop in townships like Mazatenango for bathroom and refreshment breaks. Then they rock into Tapachula, secure their (pre-allocated?) Astra Zeneca doses, remain overnight and return the next day in those same buses.
My question here would be this: Are these punters getting an all clear from an antigen test in Chiapas before their return across the border? This would seem to be the legal requirement, and many will have only had the one dose anyway.
When I returned to Aurora fully-vaccinated I had a negative test result from the day before and was told by the nurse that greeted me that this was indeed the correct procedure as the vaccine is not considered 'locked down' until 14 days after the conclusive injection.
Anyway, as I have described them, these short-term migrations are suspect on several levels, not least because they present significant opportunities for the spread of infection across communities in spite of the apparent benefits from augmenting the level of antibody protection.

* In the main arriving via commercial flights with other non-sporty passengers on board.

Posted by Inner Diablog at 2:45 am