This is a movie that most definitely does not overcook the pasta. 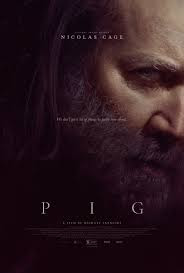 It's an exercise in calculated self-control, a masterpiece in the way that a well-prepared meal can be, one for the moment, if not the ages.

This restraint is epitomised on screen in Pig's most pivotal scene in an underground fight club for hotel and restaurant staff. Up until this moment we have surely been (at least) half expecting Nicholas Cage's character Robin to realise his stored up potential via a spectacular John Wicky discharge — the bad people who took his pig must pay, right? — but instead he merely absorbs.

Cage himself is of course crucial to the success of this unlikely format. If the role had been handed to Liam Neeson I guarantee that the audience would have ended up deeply disappointed that the chef fails to break a single nose. (Though he does some minor damage to a Camaro.)

Instead Michael Sarnoski gives us a story that delights in its own unrealised potential, not just as revenge thriller, but also as chucklesome satire, or indeed knowing piss-take. It turns out that allowing characters to skirt the edges of certain places can be even more interesting than full immersion.

There's a second essential scene, in a Portland restaurant which exemplifies the conspicuous affectation of fine dining stateside*, which simmers just below the boil in a manner close to perfection. 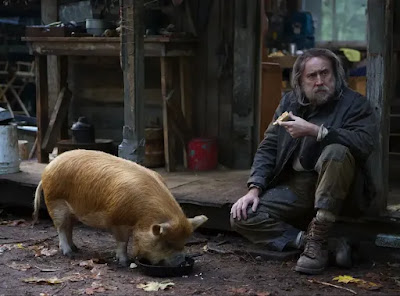 I recall seeing many years ago a production of Pirandello's play Sei personaggi in cerca d'autore at SPS. The absurdism here is far gentler and the conceit rather more One Character in Search of a...well, backstory.

I found it particularly satisfying how Robin's circumstances in the Oregon wilderness seem that much more idyllic post-pignapping and jaunt back to Portland, for by then we have learned so much more about the man on the inside. It's practically glamping.

* I know Jeff Bezos just handed $100m to José Andrés, but the formerly un-mannered Spanish chef might have served up a scrumptious cameo here.