Preparations to be together for an unknown period of time (2020) 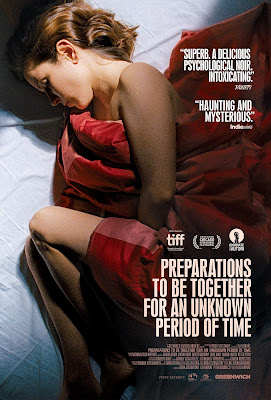 From the moment I first heard about this film, listening to a podcast on a beach last March, it sounded like it was, in a sense, made for me.
For a start they had me at Budapest. I had the privilege of hanging around several major Central European cities — for professional reasons — in the half decade after the Iron Curtain was lifted — Warsaw, Prague in particular — but my train journeys to Hungary's double capital all occurred before 1989, but in spite of that distance in time, it remains one of my top ten cities in the world, possibly even top five.
So we have a location that is oddly transcendental and a beautiful, enigmatic female protagonist (played by Natasa Stork from White God) — a brain surgeon, reverting to her native land to meet a colleague and compatriot with whom she believes she shared a signifiant connection at a conference in New Jersey, who nevertheless skips their agreed assignation on the Liberty Bridge and then apparently fails to recognise her when she rushes up to him outside his hospital.
It feels a bit like a Kieslowski tribute, and that should be a good thing overall, except that in the end Lili Horvát's s film perhaps lacks the courage of its own convictions. The mystery sort of slips away at the end, in what is less a big reveal, than a slightly irritatingly small one.
The great Polish director would have left his audience scratching their heads for profounder reasons. Still, if the destination is not quite where I expected to end up, the journey itself is stimulating.
Posted by Inner Diablog at 2:48 pm