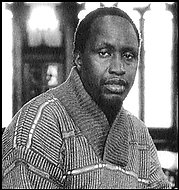 Kenyan author Ngugi wa Thiong’o earned himself a complimentary bottle of whiskey from the general manager of the Hotel Vitale in San Francisco after the he was embarrassed by an employee who refused to believe he could possibly be a guest and even tried to have him removed.

“This place is for guests of the hotel. You have to leave.”

Once they had gone to the front desk together and established that the Professor was indeed an honoured guest of the hotel, the employee apparently simply apologised and scarpered.
Posted by Inner Diablog at 10:56 am