A shaking of secondary importance 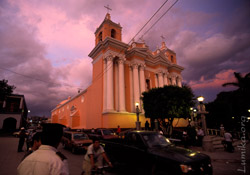 I went to a late-closing discount shopping event at The London Review Bookshop yesterday evening. I tried telling myself beforehand I was only going for the free wine, but to no avail. I still ended up buying a stack of books.

Anyway, one of these was an anthology of Norman Lewis travel essays, and in it I found his account of A Quiet Evening in Huehuetenango, written most probably a few years after the '54 coup against Arbenz:

"In the bleak depths of an interminable English winter , I was suddenly seized with an almost physical craving to write a novel having as its background the tropical jungles and volcanoes of Central America. Having succeeded in persuading my publishers that this would be a good thing from both our points of view, I boarded a plane at London Airport [I'm just old enough myself to remember the days that Heathrow went by this name] one morose evening in January, and two days later I was in Guatemala City. I chose Guatemala because I had been there before and knew something about it, but also because all one thinks of as typical of the Central American scene - primitive Indians, Mayan ruins, the wrecks of grandiose Spanish colonial cities - is found there in the purest concentration."

After three weeks in coastal towns "where bored men in big hats still occasionally pull guns on each other" Lewis headed for the Cuchumatanes and the town of Huehuetenango, the inhabitants of which he was informed,"are very peace loving, but when they become drunk they sometimes assassinate each other." (Plus ça change, c’est la même chose, as Alphonse Karr was fond of saying.)

In a bar Lewis is accosted by some tough-looking ladinos, "half-breeds who carried in their faces all the Indian's capacity for resentment but none of his fear", who require him to familiarise them with the "method of manipulating" the jukebox, a novelty in those parts back then. (What Lewis doesn't point out here is that jukebox is, strangely enough, one of the few English words of Mayan origin.)

The festivities (and the local electricity) are interrupted by an earthquake, which locals subsequently dismiss as "a shaking of secondary importance". It's a fun little article, and it's a shame that Lewis's Guatemalan novel is out of print, though I find him guilty of middle-English presumption when he describes the features of the first Indian woman he meets as "full of inherited tragedy".

I haven't, touch wood, experienced any serious tremors myself over there for 2-3 years. I do remember very clearly my inaugural step up onto the Richter scale in Guatemala. I was sitting at a long table tucking into some barbecued steak when the world started to wobble. Very gently, and for only a few seconds, but I was astounded; not least by the way everyone just carried on with lunch. My next few temblores mostly took place in the hours of darkness. I'd wake up to the canine chorus as the rattle of lamina roofing petered out and have to think back fast to the dream it has just intruded into.

The worst was the big El Salvador earthquake 0n Saturday Jan 13 2001. We were en route to Coban and had stopped at a McDonalds on the highway. I was sitting in the Chevy Blazer when it began to rock quite violently as if there were two big men on each side intent on simulating for my personal benfit the sort of roads we could expect on our way up to Semuc Champey.

Looking directly up through the windscreen I spotted the Golden Arches swaying high up on their pole, and realised that V hadn't exactly picked the safest parking spot in all Guatemala. Time to get out. Meanwhile she was in the toilet inside, oblivious to the danger. She says she actually thought someone was trying to force their way into her cubicle, and exited in a state of umbrage that inflated when she found the restaurant in darkness."What kind of a messed-up McDonalds is this?", she wondered. It was only when he reached the car park and saw the personnel of the sweat shop opposite pouring out of their workplace in a big noisy mass did she begin to realise what might have happened.

Guatemala's last monster quake was on February 4, 1976. More than 22,000 died and V had a narrow escape herself because falling furniture partly blocked her bedroom doorway that night.
Posted by Inner Diablog at 10:16 am

That '76 quake destroyed Betty's house (where she lived with her mom) and the houses of all of her sisters. They lived in tents on the barranca for ages...

I should put you in touch with Charlie, our friend who remained in Antigua to study Spanish. He's a physicist and all-around eccentric--you might enjoy a few drinks with him. He's staying until January.