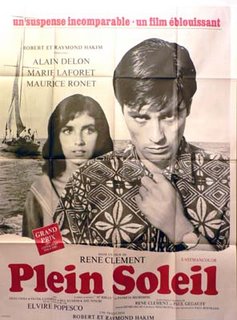 Alain Delon's Ripley is more overtly talented, and less overtly homosexual than Matt Damon's later incarnation. He wants everything Greenleaf has to offer, Marge included. He's a proper crook and cynical killer...and he gets rumbled.

Director René Clément skips the set-up scenes and takes us straight to the high point of Ripley's rapport with his debut victim. I wonder whether I would have properly understood the opening situation if I hadn't read the novel.

Clément has been very selective overall in terms of how much has been transposed into his own plot. Highsmith's invented location of Mongibello is preserved, but Dickie Greenleaf has become Phillipe Greenleaf − which contributes to the confusion over how American these Frenchies are supposed to be. (The actor playing Freddy Miles seems to be doing a comically-exaggerated gringo accent.)

Interestingly each version of the story has a different take on Ripley's prior relationship with Greenleaf. Highsmith is clear that Tom did know Dickie, if only distantly. Minghella has Ripley make up their acquaintance at Princeton. At the start of this film they speak of their childhood friendship and Tom relates some illustrative anecdotes to Marge on the boat, but later Phillipe confirms to her that he can't remember Tom and that it's all "fantasy".

The original contribution of this film to the Ripley genre are the games, real and psychological, that Tom and Phillipe play in the build up to the latter's murder. Phillipe still thinks it's a game when it no longer is, which adds a real edge to the boat scenes. It reminded me a bit of the interplay of Clifford and Sydney in Ira Levin's Deathtrap. Roger Ebert says he detects the sexual tension between the two men, whose only outlet becomes cruelty and cites Les Diaboliques as an influence.

For the audience the tension in the second half of Highsmith's novel comes from our awareness that Ripley's meticulous scheming is in constant danger of becoming tangled in its own web. Yet here there seems little danger of the killer being caught, until he actually is.

Delon himself is fascinating to watch, but the character's motivations remain a bit mysterious. He seems far less sensitive (and paranoid) than the character Damon inhabited. It's an abbreviation, albeit an attractive one, of Highsmith's conception of Tom Ripley. There's no denying though that the overall mood of Clément's film (with a special mention for the cinematography) is beguiling.
Posted by Inner Diablog at 6:58 pm