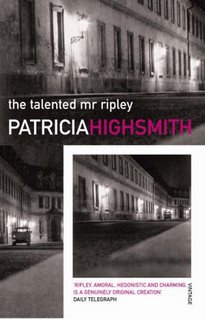 Anthony Minghella got one thing right: Patricia Highsmith's story does seem to need another murder.

It's not because we miss Dickie Greenleaf as much as we do in the movie, it's just that the last third of the book becomes a kind of back-flipped procedural as we observe the intricacies of avoiding justice. Although the textual Ripley has to deal with the additional stress of the suspicions that come to surround his forged signatures, there is no escaping the fact that, even allowing for the forensic techniques of 1950s Italy, he should consider himself a very lucky double-murderer when, on the final page, he checks into a Greek hotel using Dickie's legacy.

There's hardly that much to miss anyway of Highsmith's Dickie. He's barely less obnoxious than Freddy Miles. The key relationship here turns out to be between Tom Ripley and Dickie's girlfriend of convenience, "gourdlike" Marge. By misreading Dickie's affection for the clinging writer and the influence this allows her to wield over him, Ripley is compelled to a life of capital crime. And unlike in Minghella's reworking, there is clear premeditation in his removal of Dickie the obstacle.

For by his own account, Tom Ripley doesn't murder for pleasure. He kills to preserve his status. From the moment Herbert Greenleaf pays him to take a trip to bring back his errant trustafarian son, Ripley knows that his train has come in and, after half a decade of drifting, his biography will finally have some oomph. Threats to that momentum are removed, with just a tinge of regret. "As people went, he was one of the most innocent and clear-minded he had ever known."

Despite Tom's rationalisations we observe that he is prone to envy, self-pity and paranoia, and that his sexuality is confused. Less overtly gay than Minghella would make him, Ripley is a sexual agnostic, that nevertheless finds the very idea of Marge's underwear draped across his furniture deeply disgusting. And "her letters repelled him, he disliked even touching them."

Aside from a greatly reduced concern for consequences, Ripley has the knack of "standing apart from himself and watching the scene" and is able to convince others with his stories "because he imagined them so intensely that he came to believe them."

Ripley's ultimate fantasy becomes "to see Greece as Dickie Greenleaf, with Dickie's money, Dickie's clothes, Dickie's way of behaving with strangers. " He makes sure he never learns the proper usage of the subjunctive in Italian so that he can even sound like Dickie, and as he leaves behind his profoundly un-gregarious birth identity, he even starts overtipping like his victim, a man who always had "a thousand francs for anyone who asked him."

The most compelling thing about this novel is how easy it is to identify with Ripley. Not only can I see myself in this mirror, but a number of my friends and acquaintances as well. Ripley embodies not just the pain of exclusion, but also the sheer torture of being left out, gradually, politely even.

Dickie's murder involves something of a merger between talent and money. Ripley has the discernment, while Greenleaf is answerable to nobody and has the aura of a somebody: "People made way for Dickie." Contrast what Marge says of Tom in a letter: "He may not be queer. He's just a nobody, which is worse." The irony is that in the end Ripley has convinced everyone that Dickie had elected to end his own life in recognition of "certain failures in himself".

There is of course a profound nastiness at work here, but Highsmith makes it very hard for us to locate it in the personality of her protagonist. It's as if it's really in the way his story is told. I'd recommend it to anyone!
Posted by Inner Diablog at 6:34 pm