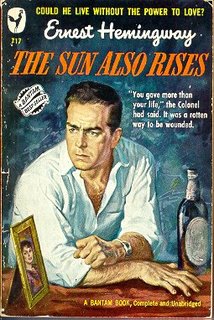 It was funny to read Scott's comment on my earlier post today, because at the time I had considered adding a few words about The Sun also Rises.

It's the only novel I have read three times and it remains an enigma to me. My first reading was when I was in my teens and came as a strong recommendation from my father.

I do think that perhaps it's one of those books like The Catcher in the Rye that you need to read at a certain stage in your life. Anyway, I loved it, and perhaps more importantly I fell in love with Lady Brett Ashley. Perhaps no other novel has influenced my outlook on life so much at the time of reading.

But then I decided to re-read it sometime during the early 90s and I was shocked to find that I could no longer sympathise in the slightest with any of the main characters. They were just a bunch of boneheads going around from place to place getting plastered. And as for the former love of my life, she now repelled me. (I recently experienced this same disturbing disappointment upon a second reading once again with Mario Vargas Llosa's Aunt Julia and the Scriptwriter.)

Then in 2001 something else happened: I fell in love with the Basque country. Suddenly this strange land with its fiestas where entire townships would don white tunics and red berets and behave like a bunch of boneheads going around from place to place getting plastered for three whole days and nights every year, became my favourite spot on Earth; and so it was time to have another go at Hemingway's evocative little novel.

My third reading was like a third glass of wine. It becomes hard to tell how much of the overall experience derives from the previous two...but at least I did stop fretting about the insipidness that had spoilt the second serving.

Scott was right about another thing, The Old Man and the Sea is, on reflection, my least favourite Hemingway novel. Though I must have liked it once because I bought it for V in translation soon after we first met in '89.
Posted by Inner Diablog at 8:51 pm

So I admit I am old-fashioned enough to enjoy Hemingway...!

You have captured my feelings exactly on SAR...and now (I think) I can read it as Hemingway meant it (though always a dangerous assumption)--a novel about vain expendable people in a country that abides forever--which is what I believe his nod to Ecclesiates meant anyway!

also I should add--people very damaged by the things people do to each other (in this case, WWI)...I am not totally unsympathetic to them (how can you have no sympathy for what has happened to Jake??!)

Old Man and the Sea is pretty good, in my eyes, just not the best Hem. The sotries in InAnother Country may be some of his best writing ever. I see Hem as one of those guys who started at the top and actually got worse as time passed.