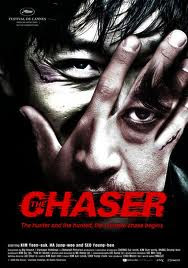 A pacey, interestingly-structured and disturbing thriller from South Korea; yet more proof that Asian cinema is experimenting successfully with genre formulae in a way that Hollywood seems unable to mimick, except through duplication.

The protagonist doing the chasing is a former bent cop turned pimp, frustrated by the disappearance of several of his girls. Convinced that they have been 'sold' he is at first unable to confront the truth already revealed to the audience, that these women are being sadistically murdered in horror-movie style by one of his regular customers, the sneering yet vaguely polite-looking Jee Young-min.

If the Hollywood remake is to be as effective, it will require a nocturnal location as characterful as Seoul's hilltop district of Mangwon, and it will also need to pull up short of offering the corrupt and unrepentedly violent Eom Joong-ho a full Christian remission of sin.