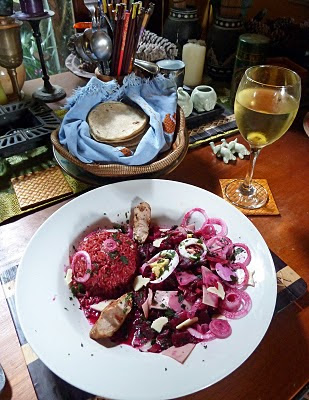 I suspect the reason that traditional Guatemalan dishes like fiambre and curtido are comparatively expensive to purchase is not entirely because the ingredients are pricey (though there are a lot of them), but instead because they take such a long time to prepare properly.

This curtido took us much of an evening to put together. Very much worth it nonetheless.

It's a multi-stage process, commencing with the boiling of the beetroot. This is then removed from the pot and peeled and then potatoes, carrots, French beans and cabbage are each then given their time in the simmering magenta liquid, to which mint and laurel has since been added.

Separately we prepared a dressing with oil, various vinegars, capers and mandarin juice and a rice dish with some of the leftover 'ink'. Before the finished dish is placed in the fridge to curtirse overnight, a boiled egg and some sliced onions are added on top.

The rice comes out looking oddly like raw mince! The colours remind me of another salad I was fond of preparing back in the UK, with cous cous, red cabbage and goat's cheese. Cous cous would be a great alternative, because it too lends itself to the dyeing process and fluffs up rather nicely.

Some of the basic ingredients from our curtido can also be put to good use in the preparation of enchiladas, such as these widely-famed examples from Mamalita's.
Posted by Inner Diablog at 9:14 pm

That curtido looks awesome. I haven't had a proper fiambre since 2006, when we went to the barriletes in Santiago Saquatepequez...Betty's godmother made killer fiambre and people all over the neighborhood would come to get some.

Fiambre is a bit too meat-heavy for me as I am only an occasional carnivore.

@Guy, come on, fiambre only has about 50 meats and it's only served for two days. Live a little!

I think we have an new advertising slogan there!