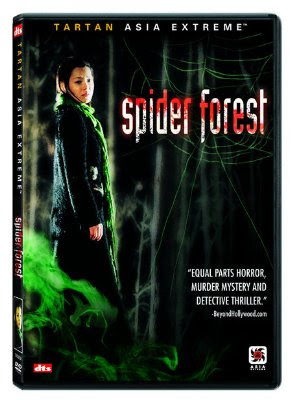 Whoa, there's enough temporal twitchiness and incoherent coherence in this movie to fit into a full six seasons of Lost, and more mysterious otherworldly women than Haruki Murakami probably ever dreamed of cramming into one of his novels.

At one point it did occur to me that in this instance Song Il-gon might have been trying to adapt a complex story from a piece of long fiction without allowing for the fact that cinematic narrative generally doesn't have quite the same space to explore disparate threads. But no, it's very much the director's own work.

Thinking back through the action it's actually hard to reach an adequate conclusion as to which parts were essential and which were complete red herrings. Aren't those spiders just as big a distraction as time travel was in Lost? (They are also responsible for the big fat exposition sequence which takes place on a stalled chair-lift, which is possibly the one really gormless part of the whole movie, which is otherwise fascinating, if confusing.)

I suppose they do furnish us with the metaphor of a wispy cobweb of interconnected ideas...which in this movie is rather like the system of explanatory links underlying the standard model of modern particle physics. They all support each other, but is there anything actually holding the whole thing up itself?

The plot as such revolves around a TV producer called Kang Min who wakes up suddenly in the eponymous forest. He's carrying at least three obtusely-linked strands of back story with him into this set-up, a dead wife, an unfaithful lover and a whole sequence of events from his childhood which he can't even recollect. The very location itself then disgorges a sticky telaraña of Asian mythology over proceedings.

Kang Min encounters a terrible crime scene and is shortly afterwards tossed high in the air by a car in an eerily-lit road tunnel. We are given to understand that much of what we see afterwards may reflect the distortions of a consciousness that has recently experienced a head-on collision with the front end of a Land Rover. This dented mind might be awake, asleep or even dead.

Meanwhile, there's a sort of police procedural going on as well, because Kang Min's cop friend Choi doesn't buy the simple explanation for the double murder: that the jealous producer used a sickle to work off his feelings towards his boss and his girlfriend, who just happened to have picked his childhood home in the forest for their dirty weekend.

I've seen enough Korean films now to appreciate the debt many of that nation's film-makers owe to Hitchcock. However, the thriller master usually liked to keep his charades nice and simple, as well as jolting his audiences with the revelation that things had been a whole lot simpler than they'd been imagining. I'll tell you now that this is NOT what Song Il-gon had in mind here.

Posted by Inner Diablog at 2:22 pm

Good review. I should watch it again--it's been several years.

I detected more than a nod to David Lynch in there, too.

Yes, I was going to mention that, but I'm not sure whether it is direct or comes via Murakami, a complete Lynch fanboy. In his mysterious wells tend to crop up and I saw that little tunnel with the door at the end of it as a certain nod towards those portals.