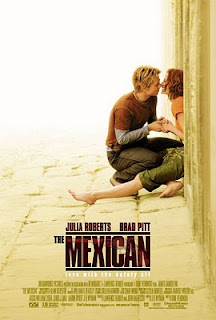 This glinting if not golden oldie came up in conversation over lunch the other day with Rudy. He happened to mention that it was largely shot on location in Real de Catorce, a stunning little hilltop town in the Mexican heartlands near San Luis Potosí. Brad Pitt so enjoyed the ambience of its stone houses that he bought one, and Rudy reckons that my explorations of Mexico will not be complete until I've made a trip up there.

Just to be sure I equipped myself with a Blu-Ray version of the movie and watched it last night with V. It was a strange, overlong experience in which the whole was definitely less than the sum of the parts, but some of the parts (especially those where James Gandolfini is present) are very good. Indeed the subplot involving Julia Roberts's relationship with Winston the homosexual hit man might almost have worked as a stand-alone concept, a feeling reinforced by the sense one gets that these scenes were actually overseen by a different director.

But as soon as Pitt and Roberts are together it becomes a very different film, a slightly goofy and hysterical action-comedy of the kind Mel Gibson was once inclined to appear in. Even then, one can look behind the star vehicle shenanigans and appreciate the contributions of a number of supporting thesps who seem to think they're in a better movie, and gawp at the authenticity of the Mexican setting...if not of the Mexicans themselves, whom Gore Verbinski portrays in much the same way as he would later portray pirates.

Other detachable delights involve on-going gags about a cemáforo and a chucho elécrico, plus a series of sepia-toned, Rashômon lite-styled flashbacks to the legend of the beautful pistol made for the nobleman's son.