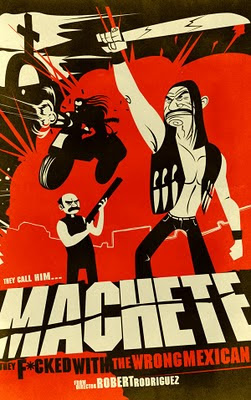 Sharing many of the faults of 2003's Once Upon A Time in Mexico — too many characters, too many people and things running around trying to be archetypes — Machete nevertheless takes itself a little less seriously and is thus that bit more entertaining for it...if you like that kind of thing. We won't be soon forgetting the tripa absailing moment.

Apparently viewers of Grindhouse will have seen an early fake trailer for this movie, and the rest of us will be left with a strange feeling that we ought to be more familiar with these characters than we actually are. For beyond his trademark action stunts and verbal quips ("Machete don't text") RR appears to want to be known as the Hispanic Tarantino, which results in a glowing patina of meta-comedy referring to a class of 70s exploitation movies only the two of them appear to have bothered to rent out.

The other Rodriguez deserving a mention here is Michelle, now fully rehabilitated after her brush with authorities, and looking hotter than Jessica Alba as Luz. For a change the beauty is more obvious than the brawn, though she is packing some serious heat.