The United States was always going to suffer from specific geo-political vulnerabilities to a pandemic that operates in this way. Add to these the peculiar hazards that come with the historical moment — Trump, election year etc. —  and we could be about to witness the mother of all shit shows.

The stage was set when the President offered governors a choice of poison chalices: him in absolute charge or the illusion of autonomy spiced up with Mr President stirring things up from inside the Oval Office.

They now know they may well be caught in the middle of a process of multiple, distributed epidemiological peaks that the White House won’t own, where the pressure from above will be compounded by pressure from around and below, with the C-in-C acting like a man who has nothing to lose, stirring up resistance to the necessary local measures, if not actual sedition, as the country as a whole plays whack-a-mole with coronavirus, the economy concertinas with the fluctuating mortality rates and the porous southern border works to periodically re-stoke the conflagration, thanks to the criminally insane policy of actively seeding a more calamitous epidemic in Mexico and Central America; countries at a natural disadvantage when it comes to controlling both payload and mode of transmission.

No wonder the season finale of The Walking Dead has been postponed until this spin-off has run its course... 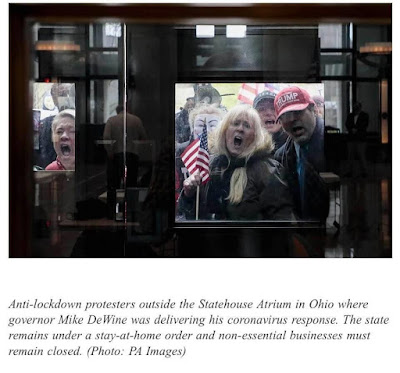 Posted by Inner Diablog at 3:02 am

thanks to the criminally insane policy of actively seeding a more calamitous epidemic in Mexico and Central America; countries at a natural disadvantage when it comes to controlling both payload and mod.e of transmission.

They need to file an injunction in every border state's Federal Court that has standing in the departure points.

And Texas wants to re-open first...