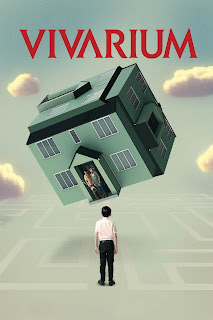 Cometh the hour, cometh the movie.

If ever there was a psychological-satire to survive the widespread narrative redundancy of these times, this is it.

It falls some way short of being a horror flick, of being science fiction, of either sufficient drama or character development, of possessing a fully satisfactory explanation and of having a big enough conceit for a full feature, yet all these deficiencies are picket-fenced away by the sheer timeliness of it.

That and the excellent casting. Imogen Poots has been a little bit eclipsed by the likes of Florence Pugh, Carey Mulligan and Felicity Jones in recent years, but she remains one of Britain's leading young female film actors. (She and Eisenberg were also great together in The Art Of Self-Defense.)

There's also a stand-out performance from Jonathan Aris, a contemporary of mine from both school and university. 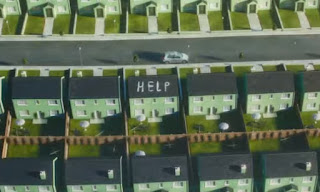 Aris plays Martin, an estate agent ⁠— creepy even by the standards of his profession ⁠— who leads a slightly reluctant young couple called Gemma and Tom to view the show home at a development called Yonder, which turns out to be a vast, uninhabited, cookie-cutter gated community, with no wall and no gate, so no need to fret about the potential horrors on the outside; instead, this movie is all about the nightmare of suburban introspection.

The property ladder here, and there is one, is much more of a snake.

Of Yonder Martin ⁠patters that "It's near enough and far enough. Just the right distance." And that in essence is always the problem with the easy-to-replicate lifestyle of suburban early parenthood that it encapsulates: one is always a bit too near to some things and a bit too far from others. And the sense of being just the right distance from an intimation of being utterly trapped tends to come and go.

Right now in lockdown, just how many are being existentially-excruciated by their constricted domestic existence, squeezed in with the little aliens they have engendered? Suddenly the prison is a lot less metaphorical.

These days people tend to use the Interwebs to escape lab-rat conformity, so it surprised me a little that although we do get the inevitable 'no network' moment of most contemporary horror flicks, neither Gemma nor Tom seem especially bothered by the more general loss of connectivity.

‘Bring up the child and you will be released...’