Undoubtedly entertaining, largely as a result of the mischievous central performance from Rosamund Pike, playing a professional guardian whose grift is to legally kidnap ageing wards and then asset strip them at her own leisure. 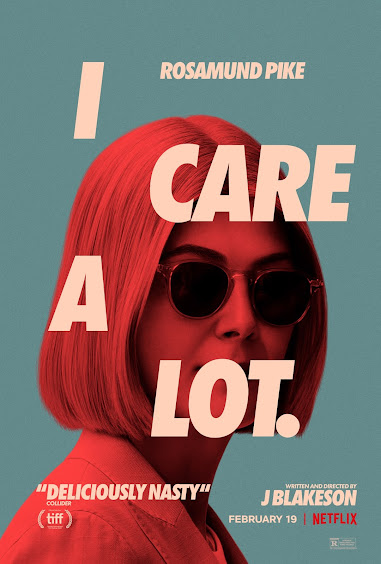 Around her however, the action becomes tonally indeterminate, not quite functioning properly as either a dark satire or as a thriller. Some of this is inevitable in a story that has no good guys to root for.

J Blakeson doesn't do quite enough to get over the fact that Marla is just plain nasty. (And not always 'deliciously' so.)

He equips her with a cod version of the philosophy outlined by Thraysmachus in Book I of Plato's Republic. He provides her with a pretty girlfriend that she obviously cares about. He makes her brave and defiant and puts her in a whole load of very tricky situations involving chaps from the Russian mob and their lackeys.

Yet these other villains are often more silly than scary and, in a way, this prevents a proper thaw of the hoarfrost that had earlier settled on our sympathies for her character.

And the developing plot ultimately distracts from the really terrifying hazard here, the possibility being shanghai'd by the state.

Posted by Inner Diablog at 4:01 pm