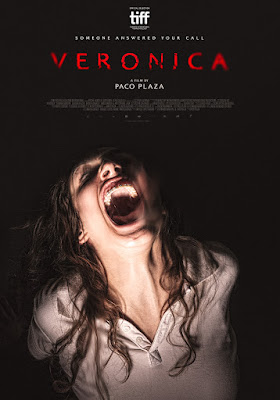 A few minutes into this film we both became aware that we might have seen it before, though we weren't entirely sure. Never a good sign!

Teenagers with ouija boards is a very tired conceit, indeed one very likely to induce sleep.

Paco Plaza's take on this stands out quite strongly however, for he avoids the generic high-school character tropes of Hollywood, instead situating this visitation from beyond in an unusual domestic arrangement within a working class suburb of Madrid in 1991 (the no phone zone again), laying on the social realism just enough not to distract.

There's also a captivating, Goya-nominated performance from then newcomer Sandra Escacena, convincingly portraying a melancholic fifteen-year old, at once prematurely adult and trapped in pre-pubescence, forced to act as surrogate carer to three younger siblings, as her own widowed mother works long shifts in a local café-bar called La Cigala.

The latter played, by Ana Torrent, is something of a cult figure in Spanish horror, and we chose Verónica as a follow up to the wonderful Cría Cuervos (1976) on the basis of her appearance here alone.

Overall it is very nice to look at, but not especially scary. No matter how many times you show me a mochila falling on the floor, or indeed a filthy mattress, I am not going to be terrified. Blind nun? Meh.

And it makes no difference to me at all to me that this was supposedly the first time a Spanish police inspector included direct observations of 'inexplicable' phenomena in his report.

Not being a believer in the supernatural, I find that movies springing from this genre most appeal when they play intelligently with the form while still managing to poke around in the pile of seemingly less conscious existential anxieties.

My understanding of the ending differs slightly from the movie's Wikipedia entry. For me this is a metaphysical twist that could have been developed or even just flagged up better: a sort of prematurely-ejaculated ghost, if you would.

Posted by Inner Diablog at 8:33 pm