On Saturday the 10th of August 2019 Jason Wade Lever passed on a scooter and made an explicit death threat towards me, verbally and with an unmistakeable accompanying gesture.

At the time I was standing holding a conversation on the pavement with a local man who has occasionally helped us with our garden: 'D'.

This was by no means the earliest example of Lever's violent intimidation directed against me*, and partly for that reason on this occasion I had made up my mind to ignore anything he said or did as I heard him coming around the corner.

And thus I only picked up the verbal gloss on the gesture (relating to how easy it would be for him to rub me out) and did not at the same time notice the pistol shape he was forming with his hand.

Reverse Angle
'D' however turned his head at just the right moment and once Lever had sped off, immediately inquired if I had spotted this virtual strafing. I in turn explained in Spanish exactly what I had just heard.

I then went inside and downloaded the cam footage to confirm that 'D' had indeed identified the gesture correctly. 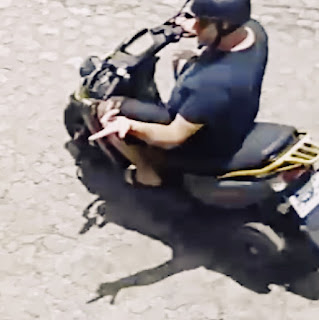 Just like I had offered his wife redemption de buena fe despite her false testimony in 2018, in January last year I offered Lever an acuerdo de paz too at the Ministerio Público, based on the sole condition that he commit to desisting from acts of violence against me and my núcleo familiar. He refused.

He was then informed by the stand-in for the fiscal that the consequence of this refusal would be an investigation. 'Fine by me', he chirped up in English.

And the threats kept coming; I have a veritable stack of audio files now of verbal amenazas that Lever and his accomplices have since directed at either me or my wife:

"Someone needs a bullet..."

And so on. Direct verbal violence, albeit sometimes hissed or whispered, couched within an on-going campaign of anulación y desprestigio.

First prize for most chilling goes either to the smaller pile within this bigger one of threats shouted by Lever's tiny children — "Kill the witch" — or the one where the two words "una más" were uttered; the removal of "Ni" at the start a deliberate inversion of the proclamation which asserts a woman's right to live free of violence in this land.

Lever ought then to consider that these episodes and any subsequent ones are a part of (also the product of) a formal process, along with the ongoing investigation by the fiscales of the MP, who have already visited our home and gathered further evidence.

*This was only a fortnight earlier. Lever came around the same corner and swerved in right behind me deliberately in yet another drive-by intimidation/verbal insult combo. 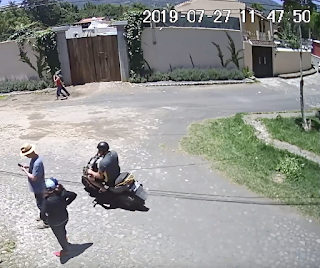 Season Two in the pipeline....

Posted by Inner Diablog at 6:55 pm