The Evilevers S01E06: The Witch Hunt

The first time Lever was recorded calling my wife a witch to her face was on July 25, 2018.
His spouse appears to have started the witch hunt around a month earlier on June 11, when she passed in front of our house and, gesturing at its main gate, duly declaimed to her son, 'There once was an evil witch...'
I suppose, at a stretch, one could say that deliberately terrifying a toddler regarding the metaphysical status of a neighbour is a form of child abuse.
Yet the use of this particular imputation is more generally associated with misogyny and an age-old stream of European folk persecution directed, in the main, at women — in particular those women who were otherwise socially vulnerable, husbandless or childless, or in some way refusing to conform to prevailing norms.
During the so-called witch craze in early modern Europe, said to have been stoked by the publication of one of history's most seminal texts of gender oppression, the Malleus Malleficarum, at least 45,000 individuals met their ends following some sort of witchcraft trial.
Yet a bit later on in Puritan New England, for example, it was recorded that most of the supposed victims of witchcraft doing all the finger-pointing, were also women.
To name someone in your community as a witch is more than a mere insult; it is a stigma, especially in imperfectly-modern, Catholic countries like Guatemala, where there is a significant residue of superstition.
You can call a woman many unpleasant and demeaning names, but 'witch' is one of them that will afford her a particular set of social hazards.
The Levers did not just stumble upon the use of this stigma; they have used it deliberately and systematically as a way of causing greater mischief.
They have encouraged its use in their social circle and we happen to know that a member of their household staff has been going around the village informing some of its more impressionable denizens that my wife is a witch. And has been recorded doing this.
And so on one occasion when we emerged out of our gate a neighbour was passing, and on spotting us immediately crossed herself before speeding up, whispering, as if to hurry away from any malign effluvia that we might have been giving off.
Jason Wade Lever himself, whose principal tactic for delaying criminal proceedings against him appears to have been to claim he doesn't speak a word of Spanish, nevertheless seems entirely un-averse to insulting my wife in that very language...

In the above clip one can observe how Lever goes up to a group of men working in the street and encourages them to join him in harassing and demeaning a local resident, at that moment the only female in the vicinity. 'Es una bruja...una bruja fea'.
He then shouts across at my wife in English "And I definitely don't have respect for YOU". This had long been clear.
Gender abuse, pure and simple.
In this next video, the entire Lever family passes in front of our gate. It was the night of the Quema del Diablo, 2019.
They had earlier appeared with a pair of piñatas, one of which was very obviously fashioned to look like a bruja, pointy sombrero and so on. They held these piñatas very deliberately up to our cameras and laughed theatrically.
Having in effect burned us in effigy in the local parque, a scene witnessed by some of our family members, they then came back, and this time Mrs Lever was at the rear of the group with her son.
She sets the scene thus: The witch is around...
Niño: Is this the witch's gate?
Mrs Lever: This is the witch's gate...yeah!'
And in this next clip Mrs Lever, having just returned home in her white Mazda and thus spotting us conversing outside with my cuñado appears to encourage her son to toddle outside just so that he too can publicly stigmatise my wife again as 'the witch', and in an entirely unprovoked fashion, as always.

By way of confirmation, his mother adds 'That's the witch...'
You can tell from the audio that my wife knew in advance exactly what was about to occur, because this was no isolated incident.
The pattern was being repeated online. Mrs Lever had been using her personal Instagram account — @carmenvsb — to mount a frenetic hate campaign which included numerous examples of witchcraft imagery.
I was eventually to lodge a formal cyberbullying complaint with the US tech giant about this, requesting a full backup of the original set of files for legal purposes. (Somewhat ironically, Facebook was today accused by a UK minister of being a 'schoolyard bully'.) 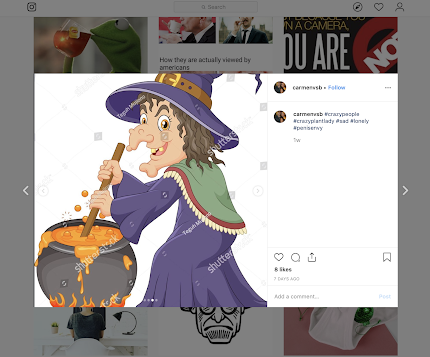 This was one of a pair of images I learned had been immediately removed the very evening that Lever received his denuncia for violence against women.

On this ignominious stream the hashtags were usually highly eye-catching as a result of the twisted and sexual nature of their scorn.

With #penisenvy Carmen Solares de Lever appeared to be insinuating that my wife must have acquired a lasting attachment to the penis her husband had gratuitously shown off to her on March 7 the previous year.

Posted by Inner Diablog at 5:42 pm