The Evilevers S01E07: Meet The Cyberbullies

In the latter part of 2019 Mrs Lever made use of a dedicated Instagram account (@carmenvsb) to blare out to the whole world just how much she uncontrollably detests us.

As the days went by, some of them featuring a little sequence of new posts of a spiteful nature usually backed up by truly perverse hashtags, I became the principal target of this torrent.

I supposed at the time that this was some sort of cretinous attempt to get a rise out of me and that the best approach would be to simply ignore. Pissing into the wind and all that.

And yet there can be no denying that aspects of this cybergrudge were genuinely unsettling. Someone I had barely exchanged words with was engaged in an obsessive, abhorrent and actually quite feverish smear campaign against me.

And bear in mind that at this stage I had forgiven Mrs Lever for reporting me to the police for attacking her when I was not even in the country and had every reasonable expectation that she would understand what a near miss that had been for her and would thus do everything possible to avoid further conflict.

And yet, just to be sure, the judge had made her sign an acuerdo in which she promised to behave in future and rein in her husband as well. 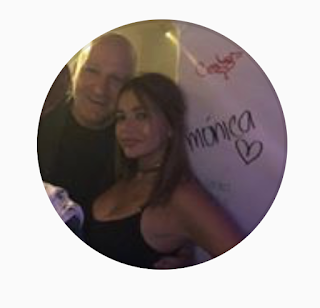 These were some of the key take outs from her social media malice...

That last gem was posted around the time her husband made an explicit death threat against me.

In one month alone there were 45 individual put downs of this nature. There was no other content at all on this feed. I have archived every post.

Who really has the time in their life for so much hate?

There was clearly a fair bit of online research involved.

On some levels it's truly pathetic, yet on others rather obviously disturbing.

I suppose there are many of us that post something on social media at some point that we later regret, perhaps because we were a bit tipsy or just not in a particularly good place at the time, but two or three times a day, and for months?

Much of it could be characterised as racial and gender abuse, along with other forms of discrimination (relating to my nationality, for example). In short, a cacophony of belittlement designed to demean and destroy, and not just psychologically.

This stinky chorrio of really rather pathological nastiness went on until the very day that Lever himself received his denuncia for violence against women. That sure put a cork in it.

At first she removed only the two posts which might further incriminate him because their content tallied rather obviously with the declarations already made by my wife at the Fiscalía de Mujeres and INACIF and detailed in the denuncia he received.

For example, the text alongside one of these posts almost perfectly matched an account given of the demented and demeaning misogynistic poem that Jason Lever had recited to my wife on March 5, 2018 and which she had detailed to investigators. (Third one down, below.)

That might have given her a degree of deniability — the old 'I woz hacked' ruse — but she then resurrected it shortly afterwards as the social media front end of Roadkill Grill, the Levers' erstwhile business here in La Antigua — complete with all the followers that she had acquired almost entirely on the back of degrading us. (The clue here was that the indexation on Google was identical.)

It was at that moment in November 2019 that I contacted Instagram with a formal complaint. I had ignored the daily drivel as it was delivered, but there was something about the notion of their use of a platform carefully nurtured via a proper hate crime to promote a shabby fast (though al fondo quite slow) food joint that really — and I mean, really — irked me. Whatever one thinks of this, there are few things lower than an attempt to profit on the back of defamation and hate.

I do have to hand it to her though, this first example below is doing some fairly heavy lifting in as much that it manages to insult both of us, simultaneously and yet with a degree of differentiation. 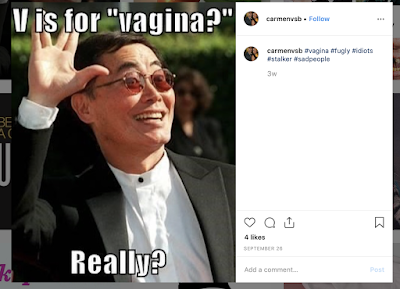 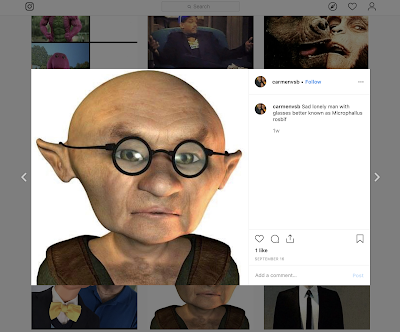 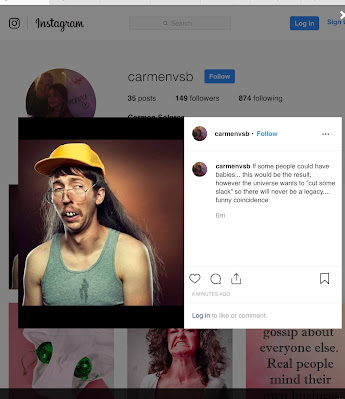 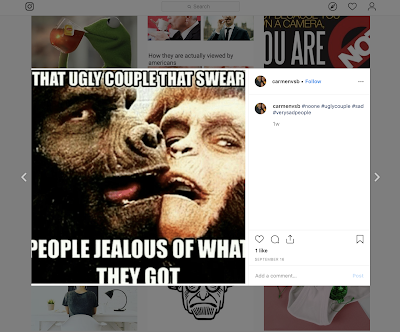 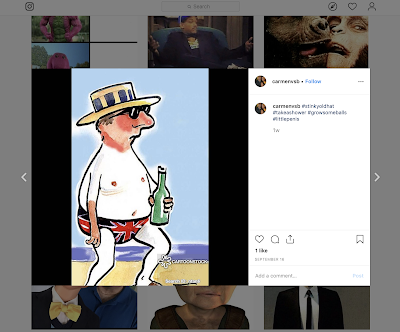 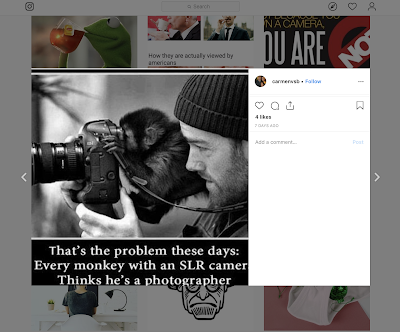 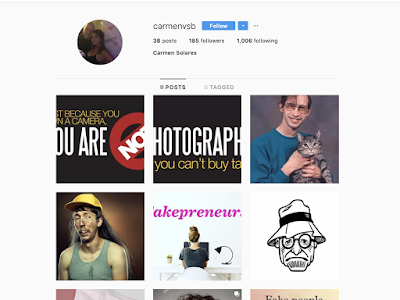 * Though I have not seen my dentist since my last visit to the UK, so my teeth could well be going a bit Prince Andrew.
Episode 6: The Witch Hunt
Episode 5: Echo and Narcissus
Episode 4: Er Indoors

Posted by Inner Diablog at 4:33 am