Carlos Saura's film and Spain's most famous ever pop song have enjoyed an almost symbiotic relationship. The ear worm is repeated on no less than four occasions during its running time, including twice in this scene, which delivered twinges of nostalgia for those 45s that needed that small plastic adaptor in the middle of the turntable. 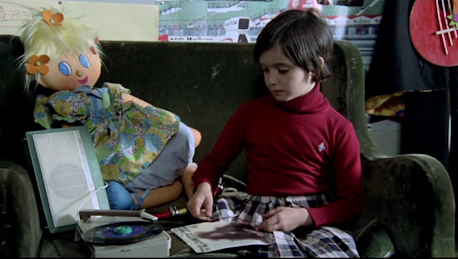 Jeannette delivered childlike yet melancholic vocals against a contrastingly bouncy background beat. The single had been released a year or so earlier to middling success, but once Saura spotted its fit with the mood of his movie, shot in 1975 as Franco lay on his death-bed, there would be no stopping it after re-release.
Central to the film's dark magic is the performance of Ana Torrent, as a nine year old girl in Madrid who imagines herself as a kind of avenging, domestic serial killer, and in whose dusky eyes we witness an uncanny interpretation of the maladjusted adult world around her.
Viewers may remember Torrent in a later starring role in Tesis. She is ahead of me in age by just a few months. Part of the more personal power of this movie results from the sensation that it is providing a window to a specific period of my own childhood, not just via the mores of this bourgeois household in the capital, but also via glimpses of the essential shabbiness of the Francoist Spain I was visiting once or twice a year around that time. (It now bothers me just a little that my own family sought recreation within a fascist dictatorship.)
It is one of those works of art that sits precisely in its own present moment. (Rather like Ghost Town by the Specials for example.) No retrospective/period narrative constructed at any stage afterwards could ever hope to match it in this respect. Though, rather enticingly, the movie does cast an brief glance on an imagined future twenty years ahead, a 1996 that is also now our past, such that these brief moments come off as a forward-projected period piece.
One certainly gets to an age when contemporary movies set in the period of one's childhood start to seem irredeemably inauthentic.
In his own middle youth Saura was one of El Caudillo's most active intellectual opponents, yet this movie, like the tune it helped globalise, imposes a subtle mood of impending gloom on its background.
The director apparently admits to having a fundamentally downbeat and pessimistic perspective on childhood* (one that is surely reflected in the title here), and its concluding scene contains no reassuring intimation of the explosion of cultural possibility that was to follow the end of dictatorship and the new ascendancy of Spanish youth.
'Viva Rey Juan Carlos...' 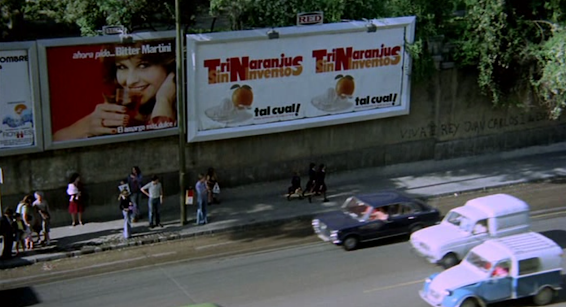 That last shot before the end credits delivers a few frissons of reminiscence e.g. Tri Naranjus, then my favourite soft drink abroad, plus the fact that Franco's regime and its business cronies covered almost every available urban space, including what we in Britain refer to as 'listed buildings', with shouty advertising hoardings. The phenomenon was especially grim and depressing in Barcelona.
Overall, a mysterious masterpiece that surely requires a rudimentary understanding of its moment in time and space even to be partially understood. And even then, something will inevitably still be lost with hindsight. 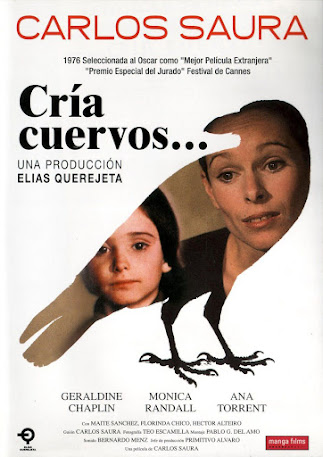 (The casting of Charlie Chaplin's daughter has to be part of its semi-shrouded payload.)
*"Childhood is one of the most terrible parts in the life of a human being. What I'm trying to say is that at that age you've no idea where it is you are going, only that people are taking you somewhere, leading you, pulling you and you are frightened. You don't know where you're going or who you are or what you are going to do. It's a time of terrible indecision."
Posted by Inner Diablog at 7:15 pm