Briefly during the decade before last, V was asked by the late, great Bruce of Panzón Verde fame to act (occasionally) as his official taster.

It wasn't that he was afraid of poisoners, he had just detected that she possibly possessed the kind of sophisticated tastes that are perhaps a bit more rare over here and wanted to tap into her opinions on the dishes he was offering at his inn.

This put her fairly immediately in an awkward situation one night in his restaurant. Bruce had ordered chicken in a green curry sauce and when it was placed in front of him by the chef (also an acquaintance of hers) he asked for an off-the-cuff opinion.

The curry was delicious. Yet she felt she had to observe that the rice should not have been made to go for a swim in the sauce before it left the kitchen.

Here's another example I captured on my last trip out of Guatemala in 2020, to Huatulco, Oaxaca. The rice is, in terms of quantity, a borderline case, and yet is just about holding its own against the flood tide of the sauce. 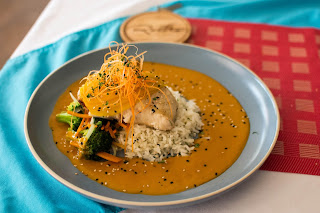 There's almost nothing I could say about this world that I couldn't find a way to intelligently contradict in a matter of minutes. Yet when it comes to food, I do tend to become a bit more dogmatic.

That said, I will never give a restaurant a bad review simply because I was served up a plate that I didn't enjoy. There is always going to be something subjective about the experience of noshing.

There are people — like my father — who will go to pretty much any restaurant and order pretty much the same thing every time (like a steak) and then there are people like me who will usually tend to be a bit more adventurous and experimental. This will, statistically, lead to a greater incidence of disappointment.

I fondly remember having lunch with my father in a small restaurant in Lambs Conduit Street in London which did not offer the steak option, at least not of the mooing variety. In fact the menu consisted almost entirely of tidbits most of us have never tried, like crocodile and scorpion. The look on his face as he studied the menu will stay with me forever.

A dinner FAIL that V constantly reminds me of occurred back in the early noughties in San Sebastián. Basque cuisine is considered by many aficionados to be quite possibly the very best in the world and the finest restaurants in this city take the form of 'closed door' sanctoria, far more akin to private dining clubs than the sort of joints one might typically encounter in a Spanish town with attached beach.

She ordered a rice dish in squid ink and received what looked like a viscous blue-black soup with a few grains of rice floating like miniscule carcasses on the surface.

It looked yummy enough to me, I have to admit. I've ordered something similar more recently at my favourite seafood restaurant in San Salvador — La Ola – but their version is definitely more rice in squid ink than squid ink with floundering grains.

Where I do get annoyed by meals consumed outside the home is when they fail what I regard as the basic rules of hospitality. If the plate that emerges is something I would be embarrassed to put in front of a guest in my own home, then I deem that the kitchen should be thoroughly ashamed of itself.

The quantity of rice served as a side is often a handy metric. Here in Antigua Guatemala I've seen arroz served in volumes indicative of a long siege by an encircling army outside the city limits.

I have never quite understood why chapines skimp on the carbs and veggies. It surely has to be cost effective to provide the customer with a sense of plenty rather than famine.

I have probably mentioned before another handy rule of thumb. Never accept less than an entire single piece of fruit on one's plate. This applies to plantains, avocados, tomatoes and so on. (With papayas one may have to settle for half as the bare minimum.)