The first Central American movie to receive a Golden Globe nomination, and near enough to being a bona fide chapin masterpiece. 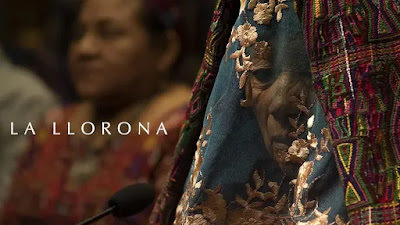 I had some issues with local auteur Jayro Bustamante's earlier work, Ixcanul, but not with this.

We watched it last year and I am not sure why I didn't get around to reviewing it at the time.    It takes two rather crucial pieces of Guatemalan mythology, one very old, the other very contemporary, and moulds them pretty successfully.

The way the wife’s character is handled is superb and some of the tomas are superlative, especially the courtroom scene.

It does however require some prior knowledge of the underlying material.

My very first evening here in La Antigua, long ago, involved an all night drinking session with Rodrigo, nephew of Efraín Ríos Montt, at the home of a very congenial retired engineer from Dundee called James Stewart.

It was the latter who first introduced me to the gathering lore surrounding the general, and perhaps as a consequence I have ended up with a more nuanced view on this than most.

I tend to believe that Ríos Montt became the totemic figure of Guatemalan civil war demonology, singled out for particular blame because, over time, the issues had apparently become simpler and he was pretty much the only significant participant left to collar.

My views on these matters were strongly influenced in the 90s by Masacres en la Selva, Ixcán 1975-82, an extraordinary book authored by Ricardo Falla, a Jesuit priest with a sideline in almost disturbingly dispassionate anthropological observations of mass murder.

There is a crucial 'scene' that I tend to recall, in which an army patrol has entered a village with the express intention of slaying all of its inhabitants.

Then, word reaches them of the coup that raised Ríos Montt and his two less memorable muckers to the presidency. The bloodshed is put on hold and the soldiers begin to mill around socialising with the very villagers they had only recently proposed to slaughter.

The new government will bring an end to the genocidal policy, they apparently surmised. But then another order comes through. Go ahead. And they do.

Posted by Inner Diablog at 5:11 pm