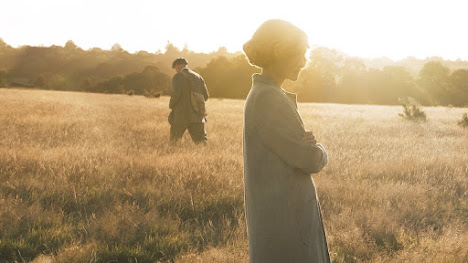 A delightful gem of a Netflix movie about two kindred spirits, an eccentric and doomed lady of the manor and an auto-didact with a passion for excavation, who combine to encounter the greatest treasure ever found beneath English soil on the eve of WWII.

This would be a war that would shake up the individualist philosophies that had taken hold before it. In his 1945 essay The War Has Taken Place Maurice Merleau-Ponty wrote "We are in the world, mingled with it, compromised with it." Dirty hands became the new post-war buzzword of the existentialist movement, which pointed to a notion of freedom tempered by the demands of the moment which, after all, we are not supposed to rise above. 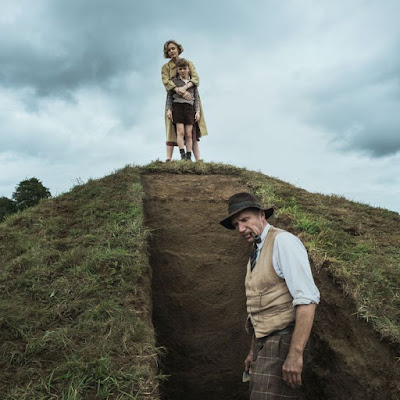 The Dig is a gently profound tale of how we are compromised by history, how it dirties our hands, yet in a potentially positive fashion.

As such it is not really about the Sutton Hoo finds at all, but how the people who made them came to appreciate how each of us mingles with the history around us, forming part of a human chain, linking the deep, mythical past to the imagined futures of the likes of Buck Rogers and Flash Gordon.

Non Brits probably need to bring to this a basic knowledge of our history and national mythology, not so much our dark ages as our 'darkest hour'.

At the heart of the story, and yet strangely absent, is the man who had himself buried in a ship in Suffolk surrounded by royal regalia and a richness of other extraordinary personal items, Christian and pre-Christian. He is commonly identified as Rædwald of the East Anglians, a powerful early seventh century king mentioned by Bede, said to maintain altars to both Christ and Woden in apartments adjoining his hall.

He was the leader of a group of fairly recent migrants who would give the English their name, their language and perhaps some of their lasting cultural preconceptions, yet formed perhaps just 5-10% of the overall population at the time.

The movie is necessarily shy about the most emblematic of the Sutton Hoo treasures, the king's helmet. When first excavated it was in something like 600 pieces, which is probably why we are denied any artificial big discovery moment.

It was first assembled (wrongly) for the Festival of Britain in 1951. 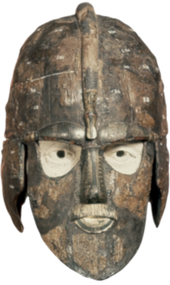 Shortly afterwards it was re-shattered and then put back together bit by bit, over quite a extended period. The chance discovery of a dragon's head piece in a separate cardboard box turned out to be the solution to the problem posed by the crest. Slotted in between the eyebrows it became clear how both these and the moustache formed part of a winged dragon overpassing the warrior's face. (Seen clearly here in the British Museum's later reconstruction, along with the pagan iconography of its panels.) 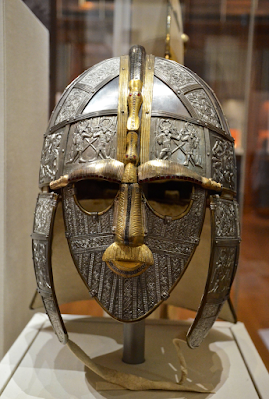 The original was adorned with gemstones that almost certainly came from the Indian subcontinent. It was around a hundred years old already at the time of burial. This would date it to the period just after the end of direct Roman rule and in basic shape it does follow the template of the imperial parade helmet. There were two holes in the base of the nose to assist with breathing and the face plate was designed to enhance and deepen the voice of the bearer in a somewhat Vadery fashion.

One of the loveliest pieces found alongside the helmet was this belt buckle, said to be worth by weight in gold precisely the weregeld for a slain thegn or Anglo-Saxon nobleman. So maybe Raedwald liked to loosen his breaches after a big blow out meal at his long table, and thereby show off just how affordable the lives of others there present would be to him.

The real Edith Pretty was said, like many of her class and generation, to be obsessed with spiritualism. A vision of spear-carrying warriors atop the strange mounds has been noted as the inspiration for borrowing excavator Basil Brown from the Ipswich Museum and setting him upon her barrow.

As Pretty, Carey Mulligan is again wistful and wonderful, yet she is outshone in the production by Ralph Fiennes, whose portrayal of Brown is pleasing in the extreme.

Some considerable effort seems to have gone into making Lily James appear less incandescently sexy than she usually does as the slightly frumpy amateur archaeologist Peggy Piggott, and yet the end result is perhaps one of her sexiest roles to date. The trouble here is not so much her fictionalised fling with cousin Rory (Johnny Flynn), but how she ever got married to the closeted Stuart in the first place.

Posted by Inner Diablog at 1:15 pm

A very nice addendum to a fine movie. Yes, Peggy was smoldering hot in the way so many women are in our world.