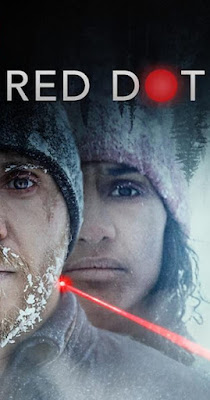 As dark as winter in Lappland, Alan Darborg's twisty Swedish thriller is one of those movies that ultimately works as a two for one.

The first film, lasting until roughly just beyond the midpoint, is about a mixed race couple from Stockholm who set off to the mountains in the hope that the northern lights will re-illuminate their path.

Soon, all the familiar Hollywood wilderness horror boxes are being ticked. The 'meet cute' at a gas station, racist rednecks, unoccupied cabins in the woods, a pet dog you know is doomed from the moment it first appears etc.

And then, without spoiling the switch entirely, I can add that things suddenly take a very different turn, and from that point onwards pretty much all the tropes are ruthlessly subverted.

This second movie feels somehow more intelligent, and yet I was left with an odd sense of nostalgia for the dumb one that had been cut rather short.

Posted by Inner Diablog at 5:36 am