From the historical record... 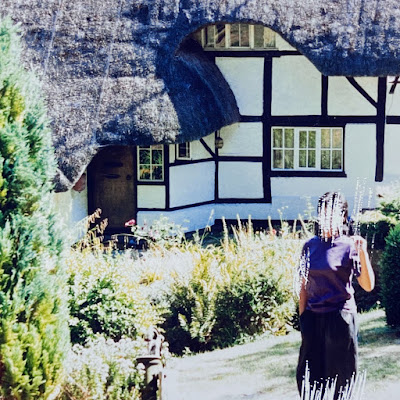 That's V outside the little thatched cottage that my parents acquired when I was a baby.

She has always been very emphatic (and in those days very analogue) about demonstrating her disapproval with any supposedly unflattering snaps I might have taken of her.

The village of Letcombe Bassett, 3km southwest of Wantage, remains a smallish cluster of such thatched buildings dating mainly to the seventeenth century.

My father always recounted rather proudly how his property appears in the Domesday Book and there have been significant archaeological finds around the village, including Roman and Iron Age grave sites.

After the second world war the long history of this settlement almost came to an abrupt end when the local council decided it would be too expensive to install mains drainage and planned to relocate the residents.

There's a fascinating British Pathé documentary from 1948 about the ensuing local resistance, which begins with a woman opening the gate of a small home identified as 'Arabella's Cottage', which bears a striking resemblance to ours, yet I believe is another, slightly larger structure very close by.

This was the name Thomas Hardy gave to a dwelling in his fictionalised version of Letcombe Bassett — Cresscombe — in Jude The Obscure. The 'cress' part suggested by the fact that the village was long famous for the cultivation of this fast-growing perennial, and the cry of 'Bassett Cress' was well known in the Covent Garden market of old.

There were other important literary inhabitants and visitors. Jonathan Swift lived at the rectory in 1714 as he finished off Free Thoughts On The Present State Of Affairs and at around the time Alexander Pope is said to have dropped in.

Our old weekend getaway sits within its own little valley through which passes the brook, feeding a pond that my father populated with trout. The A338, running along the one edge of this valley, was once a Roman road.

Letcombe, originally Ledecumbe, derives from lede in the combe or the brook in the valley. The Bassett part comes from a Richard Bassett, who held the manor in 1158.

Alfred the Great was born nearby in Wantage in 849.

Posted by Inner Diablog at 2:37 am