A lot of fun, for an almost true story.

One of those movies claiming to be a creative expansion of an investigative article - David Kushner's 2014 Rolling Stone piece on the fall of dark web 'kingpin' Ross Ulbricht. And the oddly parallel morality tale represented by the trajectory of one of the DEA agents tracking him.

Ethically, the film seemed to be sitting on the fence for much of its running time, enough to get a sore bum, but in the end did seem to be making a bid for a braver kind of moral ambiguity, let down somewhat by characters still being permitted to spout platitudes like 'there's good and bad in the world'.

I'm not sure if Ulbricht's girlfriend here was a real person or just a necessary character written into the script to a) include a fetching young lady on the side of the Millennials and b) avoid having to show Ulbricht talking to himself for much of the movie. (The only other significant female character was a bit of a piss artist, so generally that side of things was rather poor.)

Julia - the aforementioned girlfriend - begins her involvement with the creator of Silk Road with the line "Seriously, I've just fucked with a libertarian?". Perhaps she might have been fleshed out more as a character by giving her some well-briefed stuff to say about the potential flaws in her bloke's worldview later on. She'd have done him a major favour by carefully and lucidly enumerating the various ways in which this libertarian would end up fucking himself.

He'd grown up in Costa Rica, more hippie than preppy for much of his formative years, but then his fixation with eastern philosophy was supplanted by another: markets and liberties.

And so it was that he went about creating a marketplace for liberties, in effect an extreme embodiment — in code — of the some of the underlying political-philosophical anxieties that have been hooked up to the Internet since it went mainstream. For Ulbricht Silk Road was to be an 'economic simulation' designed to provide the experience of living in a society 'without the systemic use of force'.

The movie is a little shy about the full inventory of goods and services listed on this ‘eBay of vice', preferring to focus on dope, which I suppose is a way of tapping into some of its audience's inherent sense of how the world and their own preferences and ideals might occasionally appear at variance, without making the point more explicitly, or indeed asking if Ulbricht was any more to blame for the unwholesome stuff on his platform than say Facebook might be.

Yet if I were to write a screenplay about the way social media spreads extremism, I might be at least as interested in the extremists themselves as I would be in Mark Zuckerberg and his great honeycomb hive of perspective silos. The dealers and the deep web 'community' are oddly missing from this tale.

It has been calculated that 20% of US drug consumers made a purchase on Ulbricht's site. He made $420m in commissions and earmarked $730k of these earnings for hits on seven supposed enemies (rather more than we see in the movie).

It ends with another flash of white text, which indirectly perhaps poses a more substantial ethical/legal conundrum that anything that came before. Does it really matter that when Ulbricht ordered hits on a people he'd never met, via encrypted chats, nobody actually died? 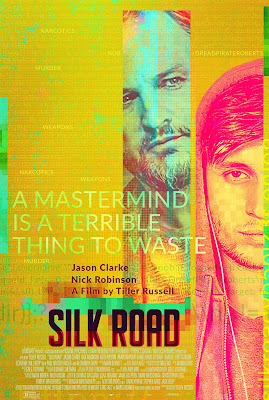 Posted by Inner Diablog at 6:02 am