The venue for my 21st birthday celebrations, not at the time a Chinese minimart, I hasten to add, but Caye Caulker’s premier (and then possibly only) nightspot, the Black Coral of fond memories... 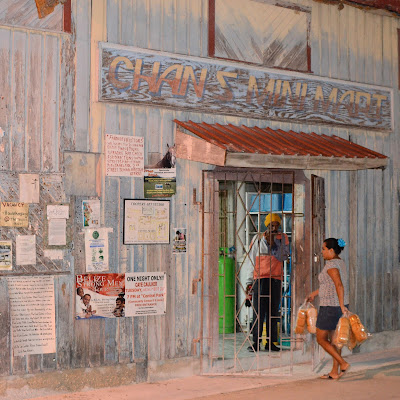 The island was a rather different place back then with a more rum-bunctious nocturnal atmosphere fed by occasionally overspilling tensions between the fishermen of largely Yucatec origin (descendants of Caste War outcasts) and the Rastas of perhaps less disciplined occupation.

Tourists of the standard sort were very thin on the ground. The non-Belizeans one came across tended to be British Armed Forces, archaeologists, volunteers (Peace Corps or VSO), spooks, scuba bores, Etonians...or some combination thereof.

Towards the end of that sultry April evening a pretty brunette English teacher from York led me to a tiny inlet and we swam and flirted amidst a swarm of phosphorescent plankton, a scene that was uncannily reproduced just over a decade later in Danny Boyle’s adaptation of The Beach by Alex Garland.

The clapboard building that housed first the dance floor then the shelves of victuals has now gone for good. This pic, 2012. 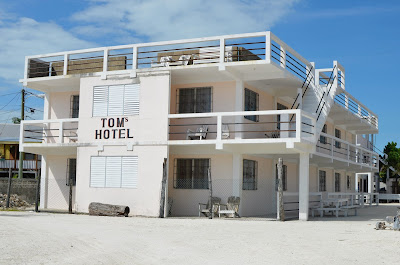 Ditto this one of Tom's Hotel, my lodgings for that personal milestone. (I have a feeling that this structure was also made of wood at the time, but couldn't swear to it.)

The evening after my birthday the whole of Caye Caulker was completely overrun by fairly large arterial-red crabs. There was almost nowhere to safely deposit a foot on the pathways and we found the door to our room partially blocked by a small tower of perhaps half a dozen of them piled one on top of the other.

Throughout the night I was maintained largely in REM sleep by the persistent sound of their scratching all around.

I have never seen (nor indeed heard) of a crustacean migration of such proportions again in Belize, but something similar appears to occur on Christmas Island on a regular basis. 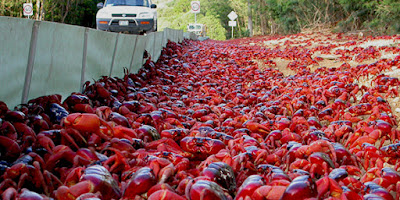