A trio of Oscar winners headed up by Denzel, make this retro detective noir a must view surely? Kind of. 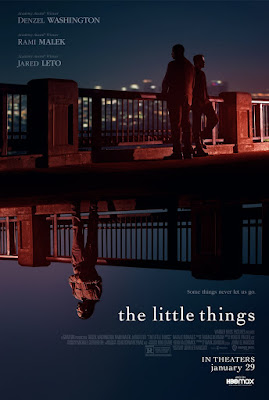 It begins with a girl driving down a lonely highway at night, followed by a caption: "October 1990".

Ah, we think, we're been plonked in that narrow temporal block where violent thrillers are starting to accumulate. The no phone zone. (Though there's a cameo from a beeper later on.)

Yet perhaps the very reason this movie feels a bit tired and derivative, or at least as if thirty years of serial killer screenplays had never been written, is that director John Lee Hancock has been trying to get his script taken up for just that long. Spielberg and Eastwood have shown interest along the way, then passed.

Washington starts off well enough, allowing one to think his performance alone will carry one through, but then turns torpid. Luckily at this stage creepy Jared Leto turns up properly. Malek does his thing with the eyes throughout. It's deliciously moody and nocturnal, to the extent that one might not notice that it is not really committing to what's at stake.

The ending is going to feel unsatisfactory to many. I suspect it would have worked better if the film had been released in the year it is set. This way it just adds to one's sense that the audience has been wantonly jerked around by withheld information.

Posted by Inner Diablog at 1:56 pm