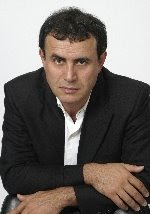 Dr Doom is back. Speaking at the Hedge 2008 Conference in London, Nouriel Roubini advised delegates that: "We've reached a situation of sheer panic...there will be massive dumping of assets'' and "hundreds of hedge funds are going to go bust."

He further predicted that the deluge of hedge-fund margin calls will lead to a market shut-down.(Let's hope the conference wasn't on the top floor of a tall building!)

OPEC instigated a production cut of 1.5m barrels effective November 1, 500,000 more than most expected, but the price of oil continued its downward plunge this morning regardless.

Russia says it may try to create some sort of national reserve in a desperate effort to unilaterally influence prices...but the Mexicans are meanwhile trying to increase production.

The fact is that OPEC producers are locked in a game of Prisoner's Dilemma with individual members under some pressure to cheat on quotas in order to shore up their national budgets. And lets face it, the governments of Venezuela, Nigeria, Iraq, Saudi Arabia etc aren't the sort you'd bet against pulling a fast one.
AIG says it might need more than the $122.8 billion it's already been given...
In 1929, hotel receptionists in New York used to ask guests checking in whether they had come to stay or to jump.
Posted by Inner Diablog at 2:28 pm