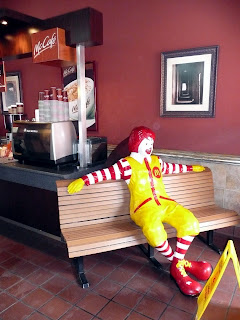 ...that this fibreglass effigy of Ronald McDonald is possessed by a mischievous spirit.

Ronald used to recline on his bench out in the garden, but first a night security guard and then several unsuspecting patrons of Antigua's branch of the evil arches were left aghast when, having carelessly sat down beside him, they felt his stripey arms closing around their shoulders...

Other burger-munching chapines claim to have taken several photographs of themselves and their mates on Ronald's bench, only to later discover that the wicked clown had been assuming a number of different poses.

Perhaps in order to curtail the spread of such chismes, poor Ronald has been moved - bench and all - to the very front of the establishment. Note that there's a Caution Wet Floor notice in front of him to prevent anyone getting too close as well!
Posted by Inner Diablog at 12:46 am

Nice article!
Thanks for sharing this space with us!