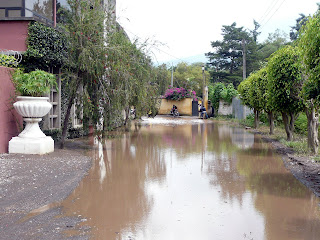 The tail end of the rainy season has been especially soggy this year, apparently a result of the phenomenon known as La Niña, el Niño's frigid little sister. Last month was the wettest September in twenty years.

Parts of El Panorama are assuming a somewhat Venetian aspect. This is the road running alongside the ex-Spa which pupils at the school behind the yellow wall must pass each day.

For some reason the Muni thought it would be a good idea to start cobbling the street that skirts the northern flank of the church last month, rather than waiting a few weeks for the start of the dry season. Every time they dig a hole it fills with water so they have had to keep sending in huge trucks to remove all the mud. This is then sloshed around the rest of the town as the exiting trucks make an even bigger mess of the uncobbled roads of the town. Good plan.

The weather polarity seems to be reversing now - the afternoons this week have been pleasant, following some fairly grotesque starts to the day.

There are essentially two seasons here in Guatemala, the warm and wet one just ending, followed by a cool and dry one which, although we are still north of the equator, is known locally as verano (summer). During the transitional months at either end of the seasons, Guatemalans experience the other two available variations of weather: warm and dry and cool and wet respectively.
Posted by Inner Diablog at 4:17 pm