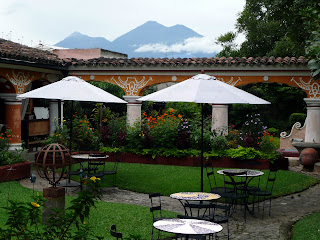 I see this clearly in both the daily routines of my 81-year-old father down on the farm and the lifestyle I myself have found myself leading out here in Guatemala.

It's one of the reasons I found it hard to buy into J.G. Ballard's notion of the mental embalmment that inevitably follows retirement to the Costas. It may depend to a large extent on your overall state of mind, but I find it much harder to be bored in Antigua than I did sitting in an office for most of the day in London. Indeed, I'm with Stendahl when he claims in On Love that mental "ossification" is the common ailment of the self-styled business brains with their devotion to "positive and useful things".

I also recall reading about the sensitive souls at the end of the nineteenth century who gave up those bourgeois jobs and the respectability they so despised in order to lead a life of artistic contemplation - only to discover that their efforts to replace material security with pyschological fulfilment was ultimately compromised by the multifarious chores involved in keeping body and soul together.

Perhaps the most enjoyable thing about pursuing la boheme in Antigua is that one can lead a modestly alternative lifestyle without having to feel you have joined some sort of sub-culture. It helps not to be surrounded by shallow fuckwits too, for one can expend an awful lot of spiritual energy constantly positioning onself in opposition to them!

This recent adjustment to an 'outwardly plain yet inwardly rich' existence, has luckily not been forced on us by the sudden evaporation of our assets. We were indeed fortunate to offload our London home and to switch the proceeds into US currency at near enough to the top and bottom respectively of each of those markets, and it's mighty tempting now to revert to Sterling in order to consolidate an underlying gain of around 20%. (Perhaps a little risky though, because I remain convinced that the UK economy is likely to be the most seriously disrupted by the current process of global de-leveraging...though I hear that a loaf of bread in Zimbabwe now costs $500 billion in local money.)

Luck we have certainly had, but I have also been able to codify a few of the more important lessons that the past 12 months have afforded us:

- By all means belong to a herd, but never lose sight of where your individual interests begin and end. I used to work for a company whose business it is to define and to motivate micro-herds and it appeared to me that as a consequence, a truly scary number of its employees themselves end up trapped in the herd mentality.

- Be single-minded and decisive, but the best time for being it may not be now. In the metropolis there is an almost unavoidable bias against inertia, but sometimes doing nothing is simply the most rational thing to do. Opportunities are worth waiting for, and the urge to be steadfastly active can actually act as a brake on certain types of productivity. How many of the denizens of shiny glass towers can sit at their desks twiddling their thumbs and yet keep a clear conscience?

- Another dampener on the rationality of the commercial world is, counterintuitively of course...logic. There are several successful market-movers, such as George Soros, who are happy to admit that maths wasn't their strongest subject at school. How many gifted mathmos and statisticians are tying themselves up in expensive knots right now?
Posted by Inner Diablog at 3:14 pm