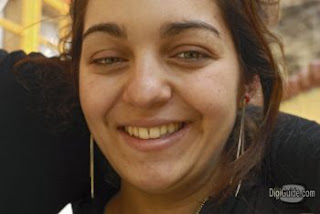 I'm sure I never used to have any serious prejudices against Balkan gypsies, but after watching Pieter van Huystee's When Borat Came to Town I've acquired a full set.
On one level it's the story of Ionela Carmen, a Romanian 17-year old who has taught herself Spanish from watching television soaps and dreams of one day emigrating to Spain - while her father is already fretting that she is two years on the wrong side of the average age for brides in her village.
This is Glod - a God-forsaken spot 85 miles north west of Bucharest which pretty much embodies the term shithole (V says it makes La Limonada look like Belgravia), which is undoubtedly why Sascha Baron-Cohen and co selected it as Borat's home town. They paid a bunch of Glodites around $4 each to serve as 'Khazakh' extras in the movie, and - critically - got them all to sign release forms.
Van Huystee's cameras are in the local bar when Borat is shown on Romanian TV for the first time and a handful of village low-lifes suddenly realise that they hadn't been participating in yet another documentary. Soon Glod has some more visitors from the outside world: a gang of ambulance-chasing lawyers who stoke up the gypsies' avarice and feelings of humiliation. Quite a dangerous thing to do in a region historically famous for its blood feuds.
One, an American, suggests that Baron-Cohen has amassed a personal fortune of $130m at the expense of Carmen's grandfather; depicted in the film as an abortionist who uses a welder's kit. He invites three of them to come with him to LA to importune the comic outside the Academy Awards, but in the end fails to get the visas sorted out, so the best the pathetic little delegation can achieve is a minor security incident at the Soho Square offices of 20th Century Fox in London.
It might have been possible to portray the plight of the inhabitants of this unfortunate hamlet in a wrenchingly compassionate light...but this isn't that movie. If anything When Borat Came to Town is more wickedly ironic than Baron-Cohen's blockbuster comedy, described by its producers to the petitioners of Glod as "a message of tolerance through satire"(!)
There's no voiceover here, so one has a sense that the Dutch director is standing back, observing without intervening as the lawyers sink their teeth into the villagers, just as the makers of a nature documentary might shoot footage of lions enthusiastically tucking into wilderbeest...except that the people of Glod are perhaps a bit more like hyenas.
In April this year a US judge threw out the villagers' petition on the grounds that they need to come up with some more substantial allegations. It seems that they are still trying.
If Sascha Baron-Cohen really has made a vast personal fortune from Borat he might consider contributing to the installation of running water in Glod; it would be a noble gesture. But judging from this film he has in no way misrepresented this place as stupefyingly backward.

Witnessing the lives and general outlook of its inhabitants, I had sudden recollections of the aggressively uncouth types who would invade my compartment when I was Interailing through Yugoslavia in the 80s. Perhaps I was already prejudiced after all...
Posted by Inner Diablog at 1:59 pm

Your a fucking idiot