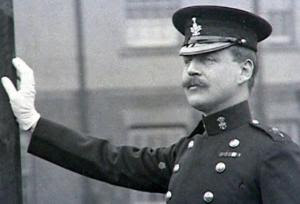 Killed 50m people. Amongst its last victims was Sir Mark Sykes, a British diplomat and Conservative Party politician who died at the Hotel Lotti in Paris on February 16, 1919.
Last week the Beeb tracked the exhumation of Sir Mark's mortal remains - which had helpfully been returned to Britain in a lead coffin - by a team led by a virologist called Professor Oxford.

As this all took place but a month ago the programme ended without any firm conclusions on how scientifically useful the biological matter extracted from Sir Mark's grave might eventually prove to be, but it was interesting for other reasons - such as the portrait it provided of a man largely forgotten by history who would certainly have ended up Prime Minister, his living relatives assured us.  And of the clash of religious, cultural (and bureaucratic!) notions that still surround the process of exhumation in Britain today.
Posted by Inner Diablog at 2:49 am