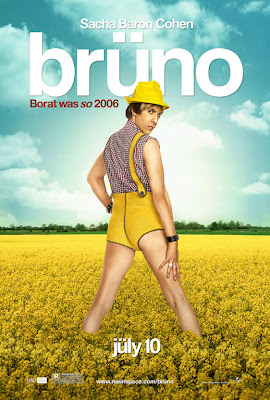 A comedy that felt more like a horror movie, was V's conclusion, where every laugh is practically a scream. "I'm impressed..." she then added with a croak in her voice.

Certainly one to watch in the comfort of one's own home, because there are times when it will force you to lose control of those laugh/scream mechanisms in an unseemly fashion. The pause button comes in very handy...so you have time to breathe, to pinch yourself.

We were agreed that it was a big improvement on 2006's Borat, which was, in the words of this flick's eponymous hero, a bit vossever.

TV Borat had been funnier than movie Borat because he'd found a good cross-section of puffed-up people to pick on, and had improvised some of those moments of satirical genius we'd come to expect from Ali G.

And they're back again big time with Brüno, at times very much an über-gay version of that earlier character (viz the hummus/hamas gag). Who, other than Sacha Baron Cohen could get Paula Abdul to talk about her humanitarian work whilst sitting on a Mexican? Or inform a Palistinian terrorist leader that his hair was sun-damaged? (The hand gesture this scary individual made after Brüno's subsequent comments on Osama's beard, was for me the biggest laugh/scream moment of the movie!)

Yet, as more and more people have been put in a position to see him coming, Baron Cohen's rise into Hollywood has been paradoxically accompanied by the lowering of his aim. It's become a bit too easy for him to prey upon America's legions of the excessively polite and the excessively dumb.

Still, when Brüno takes on a largely African-American TV talk show audience in Dallas, he's careful to make sure that the joke is on him (and indirectly on Madonna and Angelina Jolie when he tells them he swapped his iPod — one of the special edition U2 red ones — for an African baby). And it's hard to find much sympathy for the parents of toddlers willing to have them put up on a cross or subjected to liposuction in the name of fame. The editing is generally smarter here too.

Have we seen these Alabaman turners of the bent before? Was it on Religulous?* I loved it when the 'second stage homosexual converter' revealed his own inner demons by attempting to get Brüno interested in vimmin with a string of sexist stereotypes such as "women don't stick to the point".

One of the panel watching the pilot for his Brüno's Hollywood show scribbled "worse than cancer" on the form afterwards, and I guess that is how many people will still respond to the extremes of this movie, even when in on the joke. Incidentally, I don't have the same problem that Dr K has with the likes of Bono, Slash, Sting, Chris Martin, and Sir Elton turning up at the end to celebrate their own in-ness on the joke. Celebrity is a self-satirising medium of fame after all.