The Plaza Central that was 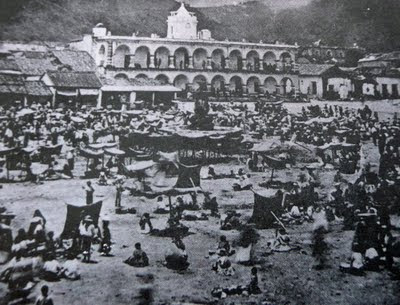 As you can see from this nineteenth century pic, the Ayuntamiento used to have a clock tower (I wonder what happened to it? It must have been a casualty of either an earthquake or an over-dogmatic restoration job)...and the Parque Central looked like a refugee camp. (It was in fact the original location of the market.)

A couple of centuries earlier a lithograph artist gave us this view below from the same building's first floor colonnade. The cathedral was still intact, and Fuego has been caught in the act of sneaking in surreptitiously from the west to give the Volcán de Agua orejas de conejo.

The plaza itself was still unlandscaped in the seventeenth century; in fact many of the trees, plant-beds and iron lamps one sees today have been installed within the past couple of decades. It used to be in a bit of a state like the Parque San Sebastián.

The big stone benches which used to be there in the early 90s s were removed, because the vagos were using them as beds. However, you can still see indentical ones around El Calvario, seemingly sinking into the ground. 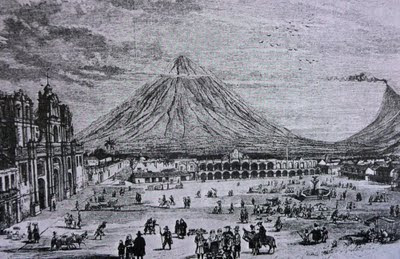 Posted by Inner Diablog at 5:35 pm