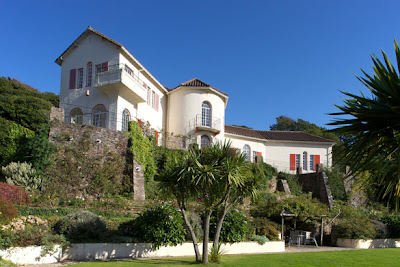 A while ago we watched amiable design historian David Heathcote making the most of a night at this highly unusual property in Devon. It was the fantasy home of a baker-entrepreneur — the man who brought sliced bread to Britain no less — and he'd chosen as his model the 'Hollywood Hispanic' mansion of actor Douglas Fairbanks.

It's the kind of house that periodically crops up on the listings of my mate Maddie in Miami, but which is altogether less likely to appear amongst the real estate ads at the back of Country Life.

When first constructed, it sat alone atop a hillside overlooking a cove-like valley. Today, the river below is chocker with modest west country pleasure cruisers and the Casa del Rio has acquired some less glamourous neighbours.

In the garden one can glimpse the ghost of a turfed-over swimming pool surrounded by stately isotales (con todo y su flor). The not-quite central feature of the main house is a magnificent marble spiral staircase balustraded with meandering ironwork.

The glossy floor at the base quotes the alternating black and white Art Deco motif seen also within the lobby at Claridges. (V hated it there and she hates it here too!) 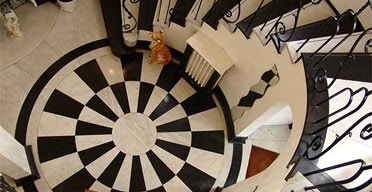 I'd say that Casa del Rio is eye-catching rather than beautiful and its exterior and tejado roof must look like even more of a folly during the dark winter months. It's available to hire for parties at a cost of just under £2000 for three nights.

The BBC4 series covering the inter-war years has been fascinating, if occasionally repetitive. There's only so many times one can learn that cocktails were invented to disguise the taste of bootleg booze, for example. But what with re-reading Tender is the Night, I suppose I am going through a bit of a 'Deco' phase myself now.

Posted by Inner Diablog at 4:07 pm