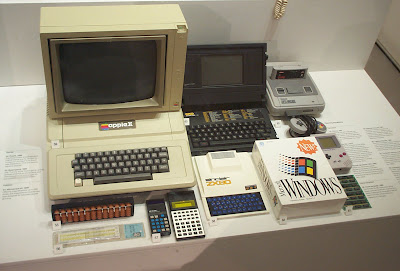 I took this pic at the Science Museum in London back in 2002.

Many (...many) years before I had had my first encounter with a computer in there. I typed in my name at the prompt and the black & white screen then diplayed "Hello Guy!". I was totally thrilled; as far as I was concerned it might just as well have been Hal 9000.

These were the bubble years of the micro-computer. It seems that Curry had the idea first but couldn't distract Sinclair from his fantasies about personal transportation. Sinclair was still, as was his wont, first to market with the ZX80 (see above, the little white door wedge beside the Apple II), but then Curry and his colleagues won the contract to make the BBC Micro under license.

Sinclair responded by trying to outflank Acorn with a move upmarket (The hideous QL or Quantum Leap) while Curry did the opposite, trying to steal some of the ZX Spectrum's gaming thunder with his Electron. Neither machine sold well and the champagne days came to an end.

For years Britain (and Cambridge geeks in particular) had led the way with 'personal' computing but surrendered the advantage to large-scale American and Asian enterprises. "We could have been the British IBM!" Curry snarls at Sinclair at one point, and the narrative here does suggest strongly that both men became distracted by their feud and might have done better to collaborate from the start.

One of the great Cambridge pubs, the Baron of Beef on Bridge Street, is the scene for some of the central encounters between the warring entrepreneurs. The last time I was in there it was just after collecting my 'free upgrade' MA in 1993, so I wasn't entirely sure if they'd shot in the real interior. In my day the floor was still covered in sawdust.

Sinclair had made the first slimline calculator and the first digital watch, but it seems he never really believed in the tranformational powers of computing and even today recoils from the Internet. He appears to have simply spotted an opportunity to significantly undercut the Apple II (the largest machine above) and the Commodore Pet on price, calculating that he could make hundreds of thousands of people desire a home computer even if they had no idea what they were going to do with it.

The drama concludes with bittersweet footage of Sir Clive (whose company Sinclair Research recently comprised himself and er...nobody else) in his C5 being passed by big lorries emblazoned with the logos of Microsoft and Compaq. Anyone for an A-Bike?

Tony Saint's script is gently funny and full of nostalgic touches, playing with the counterintuitive notion of Sir Clive's sexual magnetism. The Office's Martin Freeman is an always likeable presence and comedian Alexander Armstrong has a good turn as the irascible inventor. (Though his slaphead/ginger scalp prosthetic looks like it could be more firmly attached with Blu Tack like the RAM unit on the ZX80.)

{Full disclosure: I have a ZX81 and a BBC 'B' in a box in my storeroom here in Guatemala!} 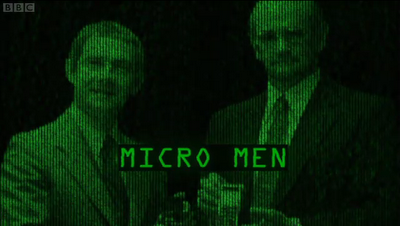 Posted by Inner Diablog at 5:00 pm