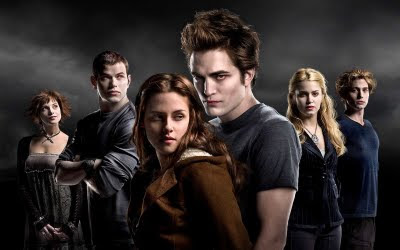 Actually, I have to say I was a lot more entertained by the first installment of what Kermayo refer to as the 'Twiglet' franchise than I had ever expected to be. (Rather like Edward's petulant threat to Bella — "I hope you enjoy disappointment" — there's insufficient follow-through on the promise of let down.)

I suppose I'm usually impressed by successful mainstream cultural products which deliberately place their hand in the flames of tack before withdrawing it somehow un-burned.

It's all very silly of course. Having established that vampires need to live somewhere where the pasty Human League look is closer to the norm — the permanently overcast and drizzly Washington state — they then head down to Phoenix with apparently few ill effects.

Most Guatemalan ladies of a certain age grew following the romantic near-misses of Candy Candy, heroine of the Japanese anime which taught adolescent fangirls to pine after fey, unreachable blokes. Japan has generally had a better idea of how to package 'innocent' fantasy to the female flipside of the otaku, so I guess we can take Stephanie Meyer's gothic romance as a sign of the West playing catch-up.

Posted by Inner Diablog at 4:38 pm