The latest bit of delusional nonsense to have emerged on one of the two extremes of American politics forms the basis of the proposed new 'America First' caucus in Congress — the idea that the USA's political culture is historically (and profoundly) 'Anglo-Saxon' and that this is something that is now under threat.

One has to wonder however exactly which part of America's political traditions are 'Anglo-Saxon'.

There was often undoubtedly a degree of chaos, uncertainty and backstabbiness at the key moments of transition between leaders, which contemporary Americans might recognise. 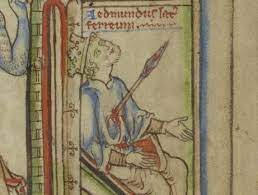 Anglo-Saxons of the old school would of course be a little bemused by much of the US Constitution, especially the 'all men are created equal' part.

If their political culture had any overriding characteristics, these would be a pronounced decentralisation of authority and a legal system based on compromise and amicable resolution rather than litigation à outrance — neither of which seem particularly current in the States.

And yet, late stage Anglo-Saxon monarchs did have a tendency to make themselves seem that much grander by selectively pilfering from the iconography of imperial Rome.

The Newsweek article here suggests that ‘only’ around 10-15% of US citizens  can claim Anglo-Saxon ancestry. This would be a high end figure even for the so-called native peoples of England outside the south and east, and so in terms of the US population, probably an absurd projection.

Posted by Inner Diablog at 4:08 pm