They speak for everyone... 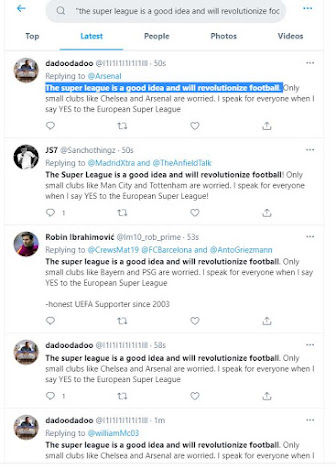 Some considered thoughts on the so-called European 'super league'.

This has been a potent possibility for some time, but the pandemic and the parlous state of the finances of certain continental super clubs, such as Barcelona and Real Madrid, plus the relative under-performance of others like self-styled giants Juventus, or even the above-averagely tall Arsenal, coupled with the absence of fans in stadiums, does seem to explain why this rupture happens to be occurring right now.

When the news was announced yesterday, we were made to listen to a series of impassioned speeches from various familiar TV pundits — in the main over-remunerated former Premier League footballers— sitting comfortably behind a paywall and griping about greed.

In England, where history and local connections have always been close to paramount in the narrative swirling around our national game, it's not hard to see why the new league might immediately appear like an existential threat at 'grass roots' level. (79% of fans are said to oppose the ESL.)

Yet out here in Guatemala and in the wider world, it's not hard to imagine how a 'product' which involves regular encounters between elite teams, could be more attractive than current arrangements, which tend to involve fixtures involving clubs with almost no international cachet.

Still, although Premier League clubs have seen their revenues decline during the pandemic, the vulgar lure of extra cash has greater appeal in Spain and Italy right now. 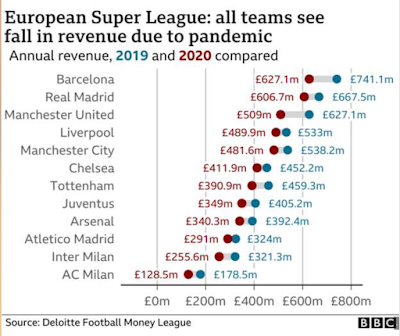 So, the breakaway entity has seen the need to invite a total of six English clubs into the non-expendable founders club, presumably using the enticement of relative power rather than that of a crude financial leg up.

Arsenal and Spurs are no doubt feeling gratified, but how will this play out in terms of the latter stages of the domestic league each year? Will they even be bothered if there is nothing really at stake?

For me, this is perhaps the biggest problem. Either we have a super league or we have domestic leagues. If certain clubs pull free of their local histories and obligations, in a sense they immediately invalidate both the higher level competition they aspire to belong to AND their traditional ecosystem.

And is it fair at all that six English clubs will be able to play every weekend on the basis of a buyers advantage acquired in a disconnected competition?

And as one wag has already asked, if all six are expelled from the Premier League, what will Everton have to do to ensure that they still come seventh?

French and German clubs, specifically last year's Champions' League finalists PSG and Bayern (two sides that relatively irked me until yesterday), are so far resisting the call up.

This could be a flaw in the revolt that either grows or diminishes as the battle lines take shape. It has been reported that two of the revolting English clubs, Manchester City and Chelsea, were initially more reluctant than the other four to jump on board *

Are promotion and relegation — i.e. jeopardy — really so important? As a teen I used to enjoy watching NFL, franchise-based, where pretty much the same teams line up every year and local connections are all too easily sundered.

Franchise-based leagues tend to be quite geographically dispersed, in spite of the looseness of those local underpinnings. And some teams really are fixed. I cannot imagine the New York Jets moving to Vermont, for example.

If the super league attains its starting quotient of 20, 3 of these will be from London. And two of these are more than likely to end up as the bottom feeders of this limited elite.

Who really imagines that UEFA or even FIFA are the defenders of the little guy anyway?

* Update: And...both City and Chelsea are set to jump ship. The ESL duly collapses. Good riddance. Maybe it will be a one club revolt, with Barca apparently very much still up for it.

Posted by Inner Diablog at 9:15 pm