Working as a consultant in London around the start of the new millennium, I found myself obliged on a number of occasions to decline the opportunity to work for several potential clients-in-need, based largely on some prior impressions I had formed. Most notably...

1) Colonel Gaddafi (Or at least one of his principal government agencies).

Maitre Edelman, seen here in S7 of Engrenages, is conspicuously lacking in such scruples. He'd more likely turn a client down for being squeaky clean.

And yet, in spite of his willingness to have just about any sort of reprobate on his books, he does still seem to adhere to an insider's code of honour. 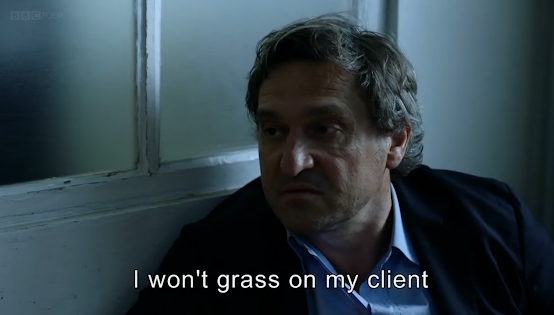 This line he won't cross is very French, and would probably make a few of his peers here in Guatemala cackle somewhat salaciously.

Maitre Edelman has always been one of my favourite characters in these gallic chirmoles, for he simultaneously reminds me of a colleague from the aforementioned immediately post-millennial era — of broadly similar disposition — plus a history teacher at SPS, a man of the cloth no less.

Posted by Inner Diablog at 3:41 pm