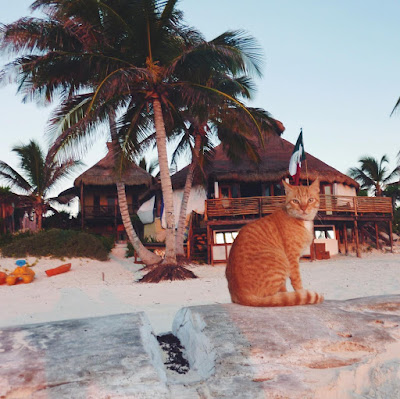 Flashback to Tulum, September 2009, when I undoubtedly had my best time ever on this stretch of coast, as the so-called Mexican flu panic had nearly emptied the country of visitors (unlike the present, more authentic pandemic) and I could claim, almost without exaggeration, that I had the place to myself.
Though not quite. Every morning on my post-daybreak dawdle down the sands, I'd stop to sit right here on a log outside a place then called Ocho and was soon joined by this friendly ginger tom. Having hopped up beside me, he'd cuddle up and follow my contented gaze across to the horizon.
Ocho became the S&S Hip Hotel soon afterwards, a change that was apparently unwelcome to some. Disgusted from Tunbridge Wells wrote on Tripadvisor: "Notice that in addition to lower rates it is "clothing optional"? One more reason I won't be going back." 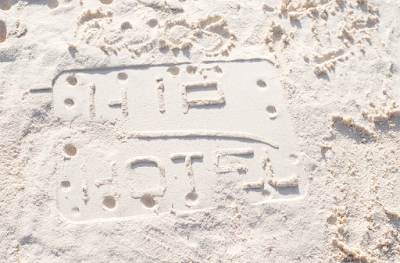 'Clothing Optional'
The lower rates problem soon sorted itself out of course. I had a decent ceviche at the restaurant — Hip Cuisine — in 2014 and the place did still feel by and large routinely chic and understated, yet has seemingly now become just another overcrowded beach hub, blaring out thumpingly loud deep house music into the troposphere in a vain effort to drown out the similarly ghastly rackets emitted by its neighbours. 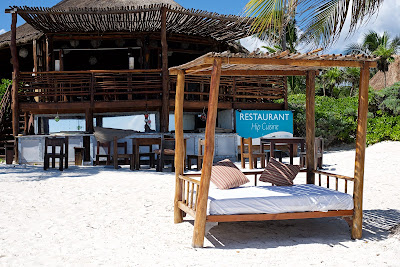 on this beach became preposterous.
Posted by Inner Diablog at 1:12 am